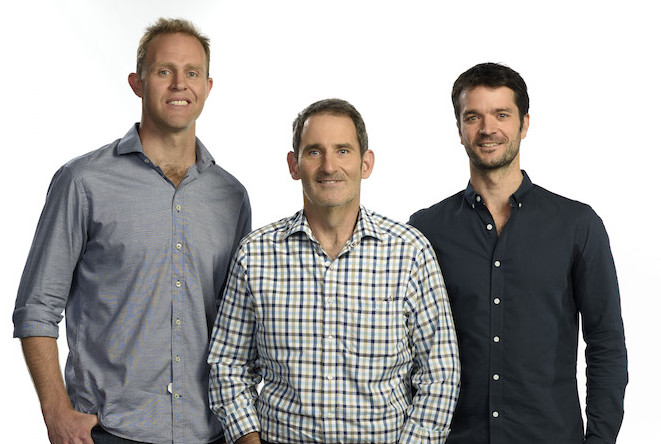 Shark Tank may only be two episodes into its second season, but the deals are already flowing thick and fast.

Car Next Door was founded in 2012, and is turning over around $2 million – with ambitions to hit $3 million by the end of the year.

The business allows car owners to rent out their vehicles with the aim of making some cash.

Co-founders Will Davies and Dave Trumbull faced the sharks on Sunday night, hoping for a $300,000 capital injection in exchange for a 4% stake in their business.

One by one the sharks pulled out, saying the equity stake wasn’t big enough.

However the co-founders held their ground, arguing they could not give the sharks a bigger share in the business because they do not want to disenfranchise existing investors – who purchased shares in the business at the same rate.

Eventually, Steve Baxter was the only shark who hadn’t pulled out.

Davies and Trumbull attempted to sweeten the deal by offering an additional $100,000 worth of equity in return for 30 hours of mentoring over a three year period.

Baxter pointed out he would have given his time to the business anyway, but agreed to the terms.

Speaking to SmartCompany, co-founder Will Davies says Baxter’s investment came as a bit of a surprise.

At the same time, though, he’s glad the Queensland-based investor put up his hand because he’s the “perfect fit” for Car Next Door.

“He’s probably the one with the most experience in a business like ours,” Davies says.

“He’s invested in quite a number of tech startups. He’s invested in the transport space as well. He built a very successful business by disrupting the status quo – he was up against Telstra. I see a lot of parallels in what we’re doing.”

Since last night’s episode was filmed, Car Next Door has announced a $2.5 million funding round and has taken its first step outside of Sydney and Melbourne by launching in Newcastle.

As for how other entrepreneurs can go about landing an investment from someone with the knowledge and experience of Steve Baxter, Davies says it’s all about knowing your business inside-out and having a concise pitch.

“You really need to think through exactly what your business is doing and answer all those questions about how the marketing’s going to work, how the business model is going to work,” he says.

“If you can get your pitch down to five minutes, that’s [also] going to serve you well because it makes it much more engaging and compelling. People have a short attention span … they can always ask follow-up questions.”