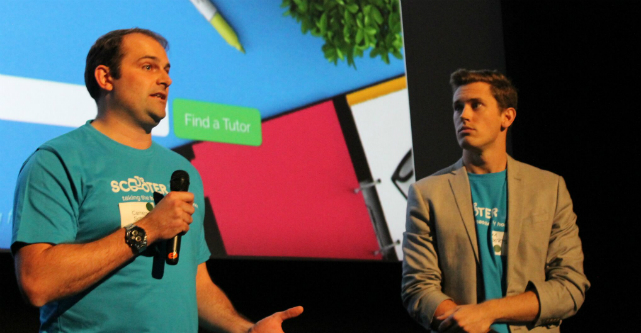 For six lucky companies it was sink or swim when pitching to some of Australia’s biggest investors on Wednesday night at RiverPitch.

Baxter founded Brisbane-based River City Labs, which has hosted and organised 10 instalments of the RiverPitch event.

All together, the investment power in the room on the night was worth more than $1 billion.

While the event has no winner or set cash prize, several lucrative investments often arise, and both participating sharks are said to have their eyes on some of the participating startups.

Many of these companies are already experiencing growth, with Bliss raising $1.2 million from US markets, and Viberent boasting over 200 customers to date.

River City Labs general manager Josh Anthony says the companies that were “investment ready” were most likely to be chosen.

The more than 60 applicants were filtered down to 10 potential companies, who then pitch to a board of eight investors, including Full Circle Venture Capital’s Rowan Grant and Arowana & Co’s Chris Drake.

After the pitches, the 10 were filtered down to six, who went through two weeks of intensive pitch training to polish their proposals.

“We look for investable startups, being investment ready is key,” Anthony tells StartupSmart.

“Growing fast and having a rock solid team is also essential, for example ScooterTutor is growing at 12% each week, which is huge.”

Although the company is important, Anthony says that investors are looking more to invest in the people behind them.

“Our investors generally invest in the founders themselves, ones that stay committed and would put their own money in if they had it,” Anthony says.

“As a founder, its much easier to get investors if those investors want to have a beer with you.”

“Generally companies talk about what they’re working on and the major problems they’re facing,” he says.

“Showing off all your market opportunities and growth is important too.”

Tutor connection service ScooterTutor displayed a map of all their users in Brisbane, and their expansion over time, and Anthony says that things like this are great to show investors, as they can easily see the potential for growth, and what their investment can achieve.

Showing off your prior success are also key to a strong pitch, Anthony says, reinforcing the desire for investable companies.

“One of the directors of Bliss owned a company called Refresh, which was bought by LinkedIn which investors liked,” he says.

“Bliss has also already raised $1.2 million from the US.”

The pitch process can be brutal and fast paced, but he says RiverPitch is “no Shark Tank”.

“We’re all about building connections, and a lot of our pitchers make connections and then follow up on them later,” Anthony says.

The importance of traction

“If you have traction, the money will follow, investors will want to talk to you,” Anthony says.

“If someone asks me what I can do right now to be a better company, I’d say ‘land ten more customers’.”

Anthony has also seen his fair share of pitches that haven’t gone so well.

“Don’t argue back. I’ve seen companies disagree with investors and it doesn’t look good in a public setting,” he says.

“Also, never lie about anything, be ready and don’t fudge any truths.

“To borrow a line from Shark Tank: They’ll smell the blood in the water.”