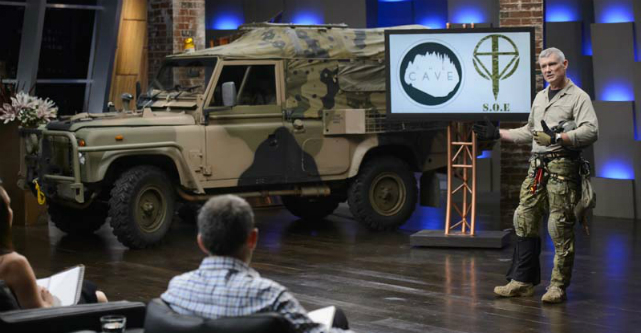 On the surface there couldn’t be more stark of a contrast between the two founders I chose to invest in on Shark Tank on Sunday night – Mick D from The Adventure Group (TAG) and Michael Timbs of Betswaps.com.

But when you look deeper both shared common traits that had more than one shark circling.

It’s hard enough to whet the appetite of one investor, let alone two or three at one go. Getting them to fight over you is really no mean feat. So what made them so special?

TAG offers high-quality, unique and adventurous outdoor experiences for clients alongside some of Australia’s former special forces operators (like Mick).

We were told that TAG offered “unique sensory experiences with a strong special forces flavour”.

Being ex-army myself that got me intrigued, to be honest the sight of special forces soldiers rappelling from up high at the beginning of Mick’s pitch was quite exciting.

TAG aims to build resilience, teamwork, and leadership through two “experiences”: the Cave consists of the ex-Special Ops forces teaching small groups of people skills that could save lives.

SOE simulates what it’s like to be on a real mission. It comprises seven different high-end experiences where a small team of clients are taught how to plan, prepare and carry out a mission including hostage rescue, and escape evasion recovery.

Depending on which mission is chosen, it typically involves parachuting, planes, trains, automobiles, and boats.

I thought this was clever – it meant TAG could upsell customers six other times after they’d done it (SOE) once. I was sitting back thinking, “I’m liking this already”.

TAG’s conservative revenue for next year was $500,000, and triple that a year later.

While I liked it, I felt there were many moving parts with the business but was willing to go in halves with Andrew ($50,000 each for 17.5% apiece).

Naomi Simson then decided to throw her hat into the ring with a $100,000 offer for 25% of TAG, plus a business manager.

The advice to Mick was decide who want to do business with before negotiating.

Mick’s gut feel was two sharks would be better than one so he asked Andrew and I to reconsider for $100K for 30%, which we agreed.

One of the biggest mistakes an investor (or anyone for that matter) can make is to judge a book by its cover.

Thankfully, I did no such thing when the baby-faced Michael Timbs walked into the tank. The 24-year-old turned out to be a shrewd businessman – four sharks ended up taking the bait before a deal was finally done.

Unlike TAG, there was no sensational entrance for Betswaps, just a screen and a portable poster.

Betswaps is touted as the world’s first sports tipping marketplace. It essentially sells information. Michael was asking for $200,000 for 10% equity, valuing his startup at $2 million.

Betswaps is not an online bookmaker – which I’ve got a real issue with. It sells tips or information for more than 40 different sports and over 100,000 different betting markets.

For example, if you’re a novice punter on Melbourne Cup day, Betswaps allows you to compare top horse racing tips, see their win-loss record, profit and return on investment (for those who followed their tips).

Customers can then see who has tips available for sale and securely purchase them.

Michael was confident in his pitch and knew his numbers well: $100,000 in revenue, including $25,000 last month alone. It’s forecast to pass the $1 million sales mark next year.

Most of the revenue comes from selling advertising.

Michael was resolute. He refused to budge, saying he was set firmly on 10% and I was asking for too much.

Andrew came in with 30% for the same amount while Naomi heated things up at 20%.

I lowered my 35% offer by 5% but to avail. Michael just stuck to his guns. It was annoying but I respected that.

He revealed that Betswaps had recently started raising capital and was overwhelmed with interest.

At that point I could have taken a punt or let it slide. Every investor knows they’re taking a risk in these situations and that you win some and lose some but I was confident that Michael and his team could deliver the goods.

Both TAG and Betswaps were successful on the day because they had the basic ingredients to succeed: A compelling offering, good business acumen and a passion for their venture.

It’s important to stick to your guns and have a clear plan when negotiating – always have a bottom-line, middle and walkaway point. Otherwise you might give up too much equity and live to regret it.