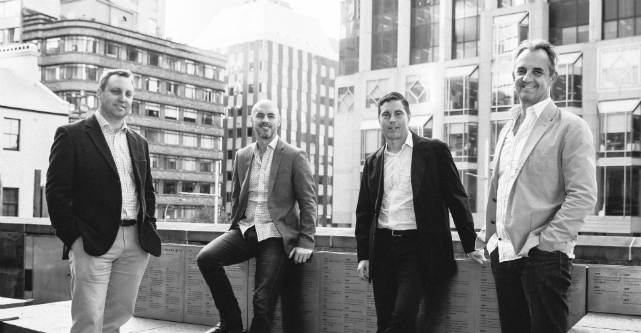 A Sydney startup offering a platform that allows companies and government to share data securely has scored a $10.5 million investment from some big corporate players.

The Series A funding round in Data Republic includes Qantas’ first every investment in a startup in its 95-year history as well as the first investment from NAB Ventures.

Westpac’s Reinventure Group, which led a seed round in the startup, also participated in the latest round.

Data Republic offers a bank-level secure platform facilitating the exchange of users’ data between companies. With a governance framework built by law firm Allens, the startup gives users full control over their own data and the legal right to protection.

Data Republic founder Paul McCarney says he’s been in discussions with the big businesses for more than a year, well before the startup launched a beta service in November last year.

It’s much more than just a capital injection too, he says, with the businesses also looking to utilise the platform.

“I think they all have a very good insight into the risks that are associated around the exchange of data,” McCarney tells StartupSmart.

“If they’re going to use data or exchange data in the future they want to be able to be controlling the governance of that. It’s about having the framework to allow them to manage privacy restrictions and the ethical use of customer records.”

The Sydney-based entrepreneur says companies are already looking to share customer data but that this usually occurs on an ad-hoc basis in private.

If privacy and security is placed at the forefront, McCarney says the Data Republic platform can result in more mutual beneficial relationships between companies and customers.

“Data governance goes up and down a whole organisation,” he says.

“But trying to exchange data comes with enormous risks. You need to really understand the responsibilities and liabilities. We’ve got a framework for that so it’s all understood upfront – it enables organisations to scale the exchange of data that’s centred around consumer rights and law.”

The large funding round will be used to help accelerate the startup into its next growth phase.

“It’s a difficult problem but we’ve achieved our first phase, we’ve managed to govern the exchange of data.

“Now it’s about how you think about providing insightful analytics at scale to be resold, redeveloped and redeployed across various applications.

“Data is at the centre of a whole bunch of decisions that weren’t able to draw on that in the past.”

Since launching a beta product in November last year, McCarney says the growth has been “solid” but there’s a lot of things still to be done before the platform is fully launched.

“There’s a lot more work to be done productising our offers,” he says.

“The discussions are broadening and increasing in frequency. People are actually talking about exchanging data. Some understand the risks involved and some of them don’t.”

He says Data Republic will be a useful tool for other startups that use big data as an asset.

“I see lots of pitch decks that say the startup is building data assets but they generally don’t get valued in the valuation model,” McCarney says.

“What we’re building is a mechanism for them to unlock that value and be able to distribute to the people they want to and manage the governance.”

“Our core development team will continue to be in Australia but there are certain skillsets that are hard to find here,” McCarney says.

“It’s important that we’ve got some development capability in the US to take advantage of the skills over there.”

Getting everything out in the open

Across the year-long discussions with the huge corporate players, McCarney says it was important to be as open as possible about the key differences in objectives and operations.

“I’ve been as transparent as I possibly could with the three people I’m working with and I have great working relationships with all of them,” he says.

“They need to understand clearly at a senior level what the objectives are around your future capital structure and where they sit inside that framework. You need to find a way to maintain communication because the cadence and the expectations are very different from a startup to a corporate.”

It’s possible for startups to partner with corporates so long as the inherent differences between the two are made clear, he says.

“I absolutely understand the rationale as to why they move in the way they move and the speed they move, but when you’re running a startup you need to make mistakes faster and manage a small group of investors’ expectations,” McCarney says.

“They can’t afford to make mistakes in the same way I can. That needs to be open and you need to be grown-up about discussing it.”