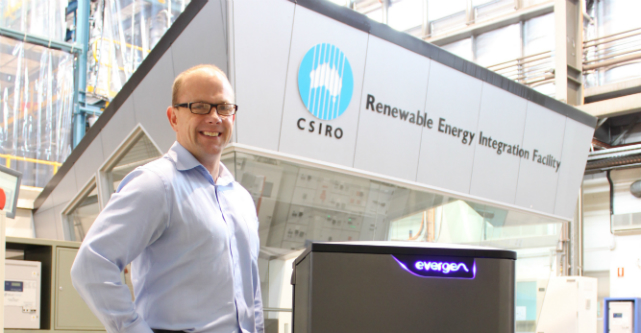 Evergen is a renewable energy tech company offering an intelligently-managed solar and battery system for households that was originally developed at the CSIRO.

The startup has just closed a $2.9 million funding round from AMP Capital and former chief executive Stephen Dunne, along with an $800,000 investment from the CSIRO.

Following a year of trials and tests, Evergen CEO Glenn Platt, a prominent energy scientist, says now it’s all about going to market and expanding rapidly.

“It’s to enable us to grow,” Platt tells StartupSmart.

“We see that there’s an amazing market really kicked off next year, which we estimate to be upwards of $20 billion eventually. We’re very keen to scale and grow dramatically.”

Platt says that Evergen combines solar energy and batteries with smart technology that continually analyses and optimises home energy costs in order to select the most efficient energy source.

“We’re an energy services company that tries to reduce our customers’ and clients’ electricity bills,” he says.

“That’s our number one focus – to reduce complexity in their lives and make things simpler and easier for them.

“Intelligent is the key word – we’re taking other people’s solar panels, other people’s batteries and putting really smart control communications and optimisation on top of that.”

This smart technology can learn the power consumption patterns of a household and combine this with weather forecasts in order to make cheap energy decisions.

“So you could charge the battery overnight on cheap electricity and avoid having to purchase expensive electricity during the day,” Platt says.

“That’s a simple scenario but very difficult to realise.”

While there are numerous tech companies now focusing on the energy space, Platt says Evergen is the first to effectively combine weather forecasts with household consumption patterns.

“There are lots of people selling solar battery systems but nobody offering a really intelligently managed energy product for the homeowner,” he says.

“That gives us a very unique differentiator.”

The startup has been completing pilot programs in Australian households this year, and he says this has resulted in energy savings of up to 80%.

“We’ve surprised ourselves with how well it has worked,” Platt says.

“We did a lot of modelling and predictions for the benefits it would offer but when we deployed it in real houses it was giving even greater savings.”

Waiting for technology to catch up

The smart technology was developed internally in the CSIRO in 2010 but solar and battery technology has only just caught up, Platt says.

“CSIRO was working on this technology and deployed it back in 2010,” he says.

“They had developed a lot of algorithms and software with all the smarts in it but they had to use off the shelf batteries and solar hardware that was fairly clunky, expensive and big, and it’s difficult to manage things like that.

“They had quite a lot of confidence around the benefits of the intelligent controlled approach but it has taken from then to now for battery hardware and solar systems to come to the point where it makes sense for people to add smart controls.”

Evergen’s energy system has now officially launched and is on offer to the general public, with the company now turning its attention to scaling quickly.

“There’s an open opportunity for people to participate in what we’re calling the next phase of deployments,” Platt says.

“From here it’s a question of scaling up. We want to do a couple of hundred deployments this year and then grow from there.”