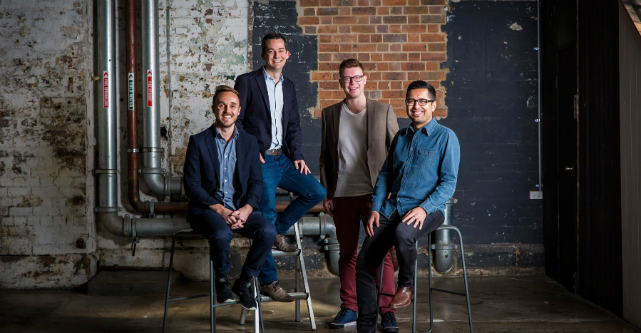 A Sydney startup offering a chance for Australians to invest their super in tech companies has closed a $1.6 million seed round from some of the most influential tech players in Australia.

Spaceship is a mobile-only super fund that will invest in larger tech companies and startups, and will be launching a beta phase by the end of the year.

Founded by Andrew Sellen, Paul Bennetts, Kaushik Sen and Dave Kuhn, the startup will also be launching an AI-powered app that will allow users to closely monitor where their money is going.

Sellen says the team was able to close the seed round in just a handful of days.

“It all happened very fast – in about three days we had raised $1.6 million,” Sellen tells StartupSmart.

“We’re really lucky to have an amazing group of investors. We’re so lucky to have so much great support from some really influential people in the community.”

Sellen says the idea for Spaceship came from the founders own personal frustrations with the financial services industry, and was born over some beers towards the end of last year.

“All of our backgrounds are in financial services and we have all experienced first-hand the frustrations of being inside big companies and wanting to do things that are radically different and innovative, and then coming up against barriers when trying to do so,” he says.

“This is about wanting to do something different and launching a super fund that invests heavily in technology.

“We want to invest where the world’s going, not where it’s been.”

An opportunity to invest in the tech giants

Spaceship will give Australians the opportunity to have more control of their super and to invest it in an area that they are passionate about, he says, with the biggest weighting in larger tech companies like Apple.

“When you ask people what their super is invested in, most people don’t even know,” Sellen says.

“We tell our members down to the stock level how much they own – we’re building a diverse portfolio of hundreds of stocks with tech at its core.”

Although tech investments are often viewed as more risky, he says the more traditional super funds also come with their own risks.

“Most default options are always quite heavy on Australian shares, and they’re very concentrated around the big four banks and the mining and resources sector,” he says.

“That’s risky and there’s a high probability of disruption. All investments have risk no matter what they are.

“If you believe the tech sector will perform well in the coming decade then you should do well with us.”

The seed round marks the first startup investment Cannon-Brookes has made through his investment company Grok Ventures.

“Spaceship will be a game-changing and I’m looking forward to transferring my own super in when it lauches,” Cannon-Brookes says.

The Spaceship app will also allow users to quickly combine separate super accounts into one with one tap, Sellen says.

A small beta group will be allowed onto the app in early November before a larger intake by the end of the year.

The founder says the key to Spaceship’s early success is the experienced and passionate team surrounding it.

“The reason why things have gone well for us so far with both fundraising and getting everything together is that we have a really great, well-balanced team with complementary skills.

“There is some amazing experience among this team. It’s the right team for creating this product in this market.”