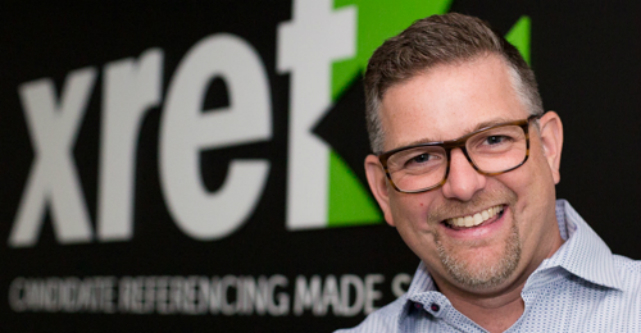 Sydney entrepreneur Lee-Martin Seymour had been working in the HR space for more than a decade when he saw a glaring gap in the market.

He discussed the idea for a simpler and more efficient way for employees to provide references over lunch with his friend Tim Griffiths.

The lunch turned into coffee which turned into wine, and by midnight the pair had sketched out the initial idea for Xref on a piece of scrap paper.

“The initial task was to protect employees from breaches in privacy and from discrimination and fraud,” Seymour tells StartupSmart.

“The task was to take the process of taking a reference away from the employer and give it to the candidate.”

Now, five years later, Xref is a public listed company that has just completed a further $8 million funding round after successfully undertaking an $18 million backdoor listing on the ASX in February.

The new cash injection comes via an oversubscribed share placement and involves new and existing shareholders. Xref has issued 11.429 million shares at 70 cents each to raise the funds.

In February the Sydney-based startup raised $4 million through the reverse listing.

Seymour says both funding rounds and the decision to go public were about scaling the business rapidly.

“The ability to scale the platform is really important,” Seymour says.

“Last year we weighed up the amount of opportunities we have and it was very clear that although Australia was a very successful, sustainable business we needed additional capital to share the love around the globe.

“We went public mainly because the journey we knew we were going to be on needed a level of rigour and re-investment scale that you don’t tend to get from the VC part of the market.”

With $12 million now under its belt, the startup will use the funding to accelerate its global sales growth, build out its platform, drive tech developments and as working capital for operations.

The virtues of being public

Seymour says that being a public company will help with the process and has also assisted with discussions with large enterprise clients.

“Being a listed company they tend to have a little more confidence in the fact we have gone through a level of rigour,” he says.

“There are levels of assurance to make sure the data we’re holding and the platforms we’re providing are trusted.

“There are an awful lot of ‘have a go’ heroes in the SaaS space that put their house on an idea and many enterprise clients that are really quite nervous about investing their innovative decisions on businesses that may or may not be around in the future.

“You need to find a way of assuring clients that you are going to be there and have done the due diligence, and going public is a way to do that.”

Xref is now used by nearly a third of the top 50 companies listed on the ASX and has nearly 400 clients in total across Australia, New Zealand, the UK, North America and Singapore.

Despite the recent controversy surrounding early-stage tech companies attempting to list on the ASX, Seymour says Xref was already a proven business when it went public and used the public market as a legitimate funding route.

“We took a good year to consider how we were going to scale and raise the capital required to push the journey forward, and at no time did we ever feel that we were in any way asking for revenue for a product that didn’t stack up,” he says.

“Over five years we had real clients, a real product and real revenue.

“Even without the listing we would still be a sustainable and high-growth business – we didn’t list with just an idea.

“If you go to the market to sell bananas don’t go with an empty banana box.”