Sydney startup You Chews scores $125,000 on Shark Tank: What its founder would have done differently 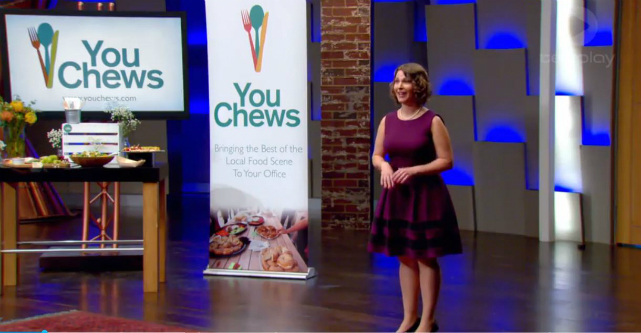 When You Chews founder Liz Kaelin walked down the Shark Tank hallway, with superimposed sharks circling over her, she wasn’t expecting to come away with any money.

Even after delivering a strong pitch for her catering startup and receiving an offer from high-profile tech investor Steve Baxter, she still didn’t think she’d be walking away with funding.

“I didn’t go on the show thinking I was going to get any money at all, and I was so caught off guard by getting an offer,” Kaelin tells StartupSmart.

Baxter’s offer was for the full $125,000 that the Sydney entrepreneur had gone in asking for, but for 12.5% equity in the startup, a big leap from the 5% originally offered.

After consulting with her co-founder, Kaelin knocked back the deal, but was eventually convinced by the other sharks to take it.

And despite never really even considering the prospect of walking away with funding, Liz Kaelin walked back down that same hallway an hour and a half later with a $125,000 deal in the works.

The Shark Tank episode featuring You Chews aired on Wednesday night but was shot eight months ago.

You Chews, an online marketplace allowing users to order catering for workplaces from a curated list of local food vendors, gained approval from the sharks for its concept, but was criticised for its revenue and the valuation of $2.5 million that the offer placed on it.

At the time, the startup had generated $370,000 in revenue across two years of operation, but the investors quickly pointed out that due to the company taking only a 15% cut of the sales, this figure was actually $56,000.

This, along with various execution risks, led all the sharks except for Steve Baxter to drop out.

The Brisbane-based entrepreneur and tech investor loved the business concept, but questioned the number of partners it had signed up, with only 35 coming on board in two years.

“I think this is fantastic, I’m tired of going to boardroom lunches where you get sandwiches or wraps,” Baxter said.

“But that’s not exactly runaway success.”

Kaelin attempted to justify this figure by saying it’s easier to work with a small number of partners that can do several orders, but this didn’t go down well with Baxter.

“You might have just snatched defeat from the jaws of victory here,” he said.

Negotiations turned to valuations, an area which Kaelin says she finds especially confronting.

“I’m a scientist, I’m used to rote learning and with valuations it’s more of an art than a science,” she says.

Baxter’s counter-offer valued You Chews at $1 million, the same valuation that was placed on the startup 10 months early in a seed funding round.

Believing the startup had grown a lot in this time and more than doubled its revenue, the co-founder rejected this deal, but was ultimately convinced by the other sharks about the value Baxter would add to the business.

Despite the criticisms and uncertainty, Kaelin says her time in the tank was useful far beyond just the capital injection.

“It was such an incredible experience and the sharks were so lovely,” she says.

“They’re incredibly switched on and incredibly insightful. They asked really sophisticated questions that I hadn’t gotten before.

“It was an incredibly enriching experience just to have been in the room getting that strategic advice.”

The importance of confidence

Eight months later, the funding deal is still in due diligence and Kaelin says things are just getting started for You Chews.

“We’re changing our brand thanks to the new opportunity that Shark Tank has afforded us,” she says.

“We’re going to reviatlise our business. Our new brand is very much aligned with our new strategy, new business and new focus on customer service.

“What we learnt is that we focused a lot on the food in the beginning and the people making the food. We’ll still do that but the new brand is really focused on the customer service aspect.”

Although she’s ultimately happy with the deal she secured, Kaelin says there’s one big thing she’d change about her time in the tank.

“Looking back, the biggest thing I see in that pitch was confidence – I was so unsure of what the valuation even was and I didn’t really back myself,” she says.

“If I could do it again I’d make a decision and stick to it, and I’d back myself and have confidence.”

“I knew I had a shit hot business that was going to take a lot of work but it was completely doable to get to those projections.

“But I didn’t have the confidence to think this is what I’m worth. Maybe I would’ve got a better deal if I did. But we still did a very good job.”

This self-doubt is still hovering over You Chews’ Shark Tank deal.

“Even going through the due diligence, the reason that has taken a long time is because I’ve been unsure,” Kaelin says.

“Is this the right decision? Is he the right investor? That’s the worst thing you can do as an entrepreneur.”

It’s important for other founders and entrepreneurs to stick to their guns even in the face of five imposing investors and inevitable mistakes, she says.

“As entrepreneurs you have to go hard and your epic failures are going to be even more epic, and maybe even on TV.

“But be really confident and make a decision. If you’re going to do it, do it.

“Not making a decision is the worst thing you can do.”