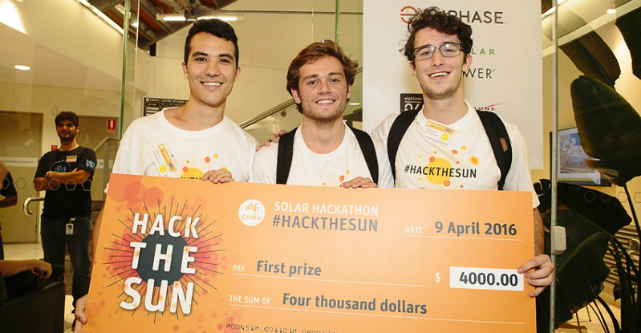 Sixteen teams of software developers, designers, and business minds in Sydney have teamed up to achieve the impossible: hack the sun.

A hackathon ran by the CSIRO last month aimed to promote solar energy in Australia through a series of solar tech challenges, with $10,000 in prizes on offer.

The teams were given less than a day to come up with ideas, which were then submitted to a panel of judges.

The hackathon hoped to find teams that could be considered for the organisation’s ON program, an entrepreneurship project focusing on impactful science and technology ideas.

Tech incubator Eighteen04 sponsored the program, also hoping to seek out bright minds to work with in the future.

CSIRO have run hackathons in the past, but this is the first ever solar hackathon the organization has run.

“We were excited to see what they came up with, the tight time frame really fosters creative thinking and innovation,” Kikken tells StartupSmart.

The winner of the hackathon was a startup called Take Charge, an online community for solar users across Australia.

Users of the community are ranked on their energy consumption data, and Take Charge allows them to engage in ‘challenges’ against other users, with odds being calculated in both virtual and real dollars.

The team developed an algorithm that automatically pitches one user against another every 24 hours to maintain engagement levels.

This also allows for participation by users without solar panels, with everyday homeowners being able to signup and bet on the challenges.

Throughout this process, users have access to information pages about how to use electricity better and learn information about solar.

The three team members all have backgrounds in solar engineering, and were excited to “build things and innovate”.

Take Charge took home $4000 in cash for first place, with the second and third place teams claiming the rest of the prizes between them.

The winning team now has its sights set on growth, with Kikken saying they want to pursue the idea and its potential.

“They want to work out if they can make a commercial business out of it,” she says.

The second placed team came up with Wala – a small solar device that attaches to vehicles and collects solar data nationwide to help justify solar investments.

The CSIRO is hoping that the first solar hackathon will inspire discussion about the potential for solar development, saying that “the conversation doesn’t stop here.”

As Energy Research Director at CSIRO Dr. Glenn Platt stated in his address to the hopeful hackers: “I believe we really can change the world and how we use energy, so let’s get out there and do it.”