After two years working in secret, Melbourne startup launches with $1.4 million in funding and a former federal finance minister on board 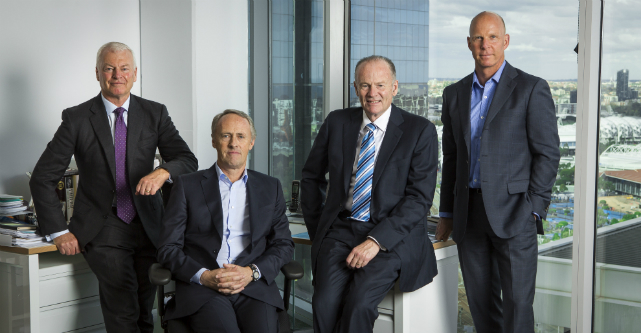 After two years of working in secret, a Melbourne robo-financial advice platform has officially launched with $1.4 million in seed funding and the backing of some of the biggest names in the Australian financial sector, including a former federal finance minister.

Six Park is a robo-advisor startup offering a platform that combines human oversight and automated technology to help users create a professionally-managed and diversified investment portfolio.

A market “crying out” for it

The founders were inspired to create the tech company after seeing the need for a trustworthy, efficient and independent directly while working in the sector.

The pair had been working together for more than 20 years and zeroed in on the new idea two years ago.

“A couple of years ago we identified a need in the Australian market for a better way for investors to get investment guidance and execution,” Garrett tells StartupSmart.

“It was mainly a function of the current model in Australia being too costly and too conflicted in getting financial advice.”

Garrett says he got a first-hand view of the emergence of similar robo-advisor technology in the US but the model is yet to take a hold in Australia.

“So we went about building an offering that would provide high-level professional financial advice that was trustworthy and at a low price point,” he says.

“This business model has gotten traction in the US and it’s still in an infant stage in Australia. But it is happening and it is going to happen. We think we’ve got a very competitive offering, if not the best offering.”

A key element to pioneering this new form of financial advice in Australia was building trust among the users, and Garrett says the esteemed board of advisors that have formed around Six Park are driving this.

“People are ultimately trusting a highly automated website with their financial decisions, so they need to trust that the people behind it are independent and have the investment knowledge and experience to trust it,” he says.

“We needed to get the right team of people together to build the trust in the market.”

The ability to point out the clear need in the sector for such a service, and connections in the industry proved to be crucial in bringing on board the big names, Garrett says.

“We didn’t need a lot of external marketing to these guys, every week there were stories of abuse in the market, of people getting ripped off and conflicts of interest in the industry. That helped draw high-quality people,” he says.

“About 80% of advisors are owned by large banks. The industry is screaming out for a business model like this.

“The fact that we were building a user-friendly, highly-accessible but sophisticated offering had a lot of appeal to people of the level of sophistication like Lindsay Tanner and Paul Costello.

“For them their reputation is the most important thing, that’s their brand equity. They wouldn’t have gotten involved if the fundamental business mode wasn’t very compelling.”

Tanner, who served as finance minister in the Labor government from 2007 to 2010 and is also the chairman of Essendon Football Club, says the people involved with the Melbourne startup make it stand out from the pack.

“I am excited about playing a role with a startup in an emerging sector that is dynamic, technology-driven and socially useful,” Tanner says in a statement.

“The standout feature of Six Park is the calibre and experience of the key people involved.”

Garrett adds that it isn’t just “token” board and meets monthly to review asset allocation, global markets and refine the company’s overall strategy, and will also convene during times of “extreme market volatility or distress”.

“What we think is different about ours is the level of professionalism, experience and oversight that the advisory board brings,” he says.

Two years in the making

The startup has been in the works for more than two years now, and Garrett says this slow approach was a deliberate measure to ensure it is compliant with regulations and able to grow rapidly on launch.

“We spent a year and a half building the system and investing in it so it would be regulatory complaint, scalable, reliable and agile,” he says.

“We were doing all the right things to build a sustainable business model, not just something trying to opportunistically to quickly take advantage of a window of opportunity.

“We have built something that has staying power and very good logic behind it in terms of investment strategy and it’s available and affordable for all Australian investors, not just high net-worth individuals.”

To facilitate this slow-play, Six Park secured a $1.4 million seed investment from a group of 12 private investors.

“We built a prototype of the offering and approached a small group of private investors known to us and presented the business model and the offering,” Garrett says.

“We were able to pull together about a dozen private investors and for the seed fund over two rounds while we did a proof of concept and then the beta test.”

The group of investors also served as beta testers of the Six Park platform, allowing them to see first-hand the virtues of a robo-advice service, he says.

“They could see the construction of a portfolio of diversified exchange traded funds based on a risk assessment we built,” Garrett says.

“We did all of this manually while we were building an automated form.”

“Getting seed funding is a lot of work and it’s never easy. But it was made easier by the fact we were able to put the product in front of people and let them use it. With that they were willing to invest and that further validated our model.”

The importance of resilience

Six Park completed a soft launch two weeks ago and is now officially open to the public.

“With any software system it’s always best to have a soft launch when you unleash it on the public so you can deal with any issues,” Garrett says.

The launch has been two years in the making, and he says this patience and long-term approach is crucial for startup founders that want to create a sustainable business.

“Be patient and be ready to be criticised,” Garrett says.

“Stand by your convictions you will eventually attract good people and funding if you have a good idea.

“Ultimately you need to be very resilient. It’s very difficult to build something from scratch but if you have a good idea it’s ultimately very rewarding.”