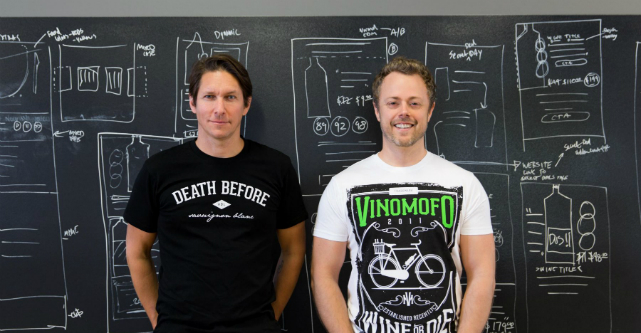 A company started by a pair of brother-in-laws in an Adelaide garage five years ago has closed a $25 million funding round as it looks to take its operations “to the next level” and become the next Australian startup to find global success.

The large investment in online wine retailer Vinomofo comes entirely from Blue Sky Venture Capital which has acquired a minority stake in the Melbourne-based startup, with founders Andre Eikmeier and Justin Dry retaining their majority stakes.

The capital injection will be used to expand the Vinomofo brand across Australia and support its ambitious plan to launch in six new countries in the next year.

Vinomofo has enjoyed rapid growth recently, with a team of 100 employees in its Melbourne office, over 400,000 users and 100% year-on-year growth in the last 12 months.

This is the first funding round in the Aussie startup apart from private investments that helped the founders buy back the company from Catch of the Day in 2013.

The founders have enjoyed the independence that came with this, Eikmeier says, and deciding to take outside funding wasn’t an easy decision.

“We were really comfortable with our dynamic and the culture we’ve created through our independence and we’re well aware of how this can change things,” Eikmeier tells StartupSmart.

But for Vinomofo to meet the lofty heights that the founders envisage, a large external push was needed, he says.

“We had gotten to the stage where Justin and myself both had that real, genuine belief in our guts that Vinomofo could be this thing that is useful to everyone all over the world – that we could be an Uber or Airbnb,” Eikmeier says.

“We started thinking about the rest of the world and reaching the rest of Australia a lot faster, and we came to the realisation that without the funding we’re actually holding back what we think we can achieve.

“We could very clearly see what we could do with the money and how it would really help the business.”

Finding the right investment partner was crucial in ensuring Vinomofo’s much talked about internal culture is maintained despite the outside presence, Eikmeier says.

“We took our time with it – getting the right cultural fit was really critical,” he says.

“We said that we wouldn’t raise if we couldn’t get the right partners – that wasn’t just a spiel, that was genuine for us.

“We feel that Blue Sky is really aligned with us. They’re entrepreneurs more than they’re investors and they’ve been the same people the whole time, they’ve been straight-up.”

Taking it to the next level

The round will be partly used to fund a “big national campaign” to ensure the Vinomofo brand reaches far and wide across Australia.

“We feel that although we’ve had decent traction in Australia there are still so many people that have never heard of Vinomofo,” Eikmeier says.

“Generally when they do hear about us they like us, so let’s make it so everyone has heard of us and gives us a try in a shorter space of time.”

Vinomofo also plans to launch a “lite business model” in six new markets starting from May to test the waters before zeroing in on the areas with the most interest.

“When we see traction we’ll be able to really turn the tap on in those markets.”

It’s this belief that Vinomofo can become a truly global company that led the founders to seek external support, Eikmeier says.

“I don’t think we’d be able to do it without raising money – not in our lifetimes at least,” he says.

“It could take 20 years or we could start heading there in two or three. It was a no-brainer.”

The funding will help the startup bridge the so-called second ‘valley of death’ and the large later-stage round is rarely seen on Australian shores.

“We hoped we’d be able to raise the full amount here in Australia and we’re really pleased we’ve been able to do that,” Eikmeier says.

“The Australian investment community is looking at growth investment more seriously – that’s where the potential lies for finding the Australian companies that have proven their model and are ready to take the next step.”

“Vinomofo is a great expression of the quality of deals that come through our doors,” Stead says.

“In just five years Andre and Justin have built a cracking business with huge scope to scale globally, which is where we come in.”