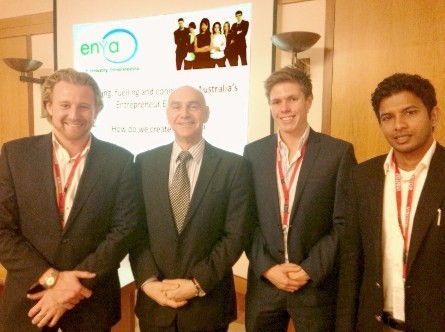 A group representing young entrepreneurs in Australia has called on the federal government to create a $20 million loan fund to encourage the creation of new businesses and jobs.

The Enterprise Network for Young Australians (ENYA), has briefed federal politicians on policy options aimed at training and inspiring a new generation of entrepreneurs.

“Everyone in the government understands that Australia needs to focus on creating jobs and sustainable growth, especially now the mining sector is in decline,” ENYA chief executive Jeremy Liddle told StartupSmart.

“We were talking about creating jobs and teaching people to be job creators not job seekers by building companies.”

The headline proposal was a $20 million fund to provide seed loans to entrepreneurs under 40 years of age.

“In five years, the fund could create 5000 jobs and generate over $30 million in tax revenue,” says Liddle.

The four-year fund would be managed by ENYA, who would loan $20,000 to 250 early-stage start-ups a year. ENYA also requested a further half million to manage the administration of the fund.

The scheme is modelled on a successful Canadian program ran by the Canadian Youth Business Foundation. According to Liddle, the model has a relatively low drop-out rate (6.2%) and most loans are repaid, so the fund would be self-sustaining.

“We’d hope through the education, mentoring and funds we loan them, we could skill them up to the point where when they’re ready, they can go and raise money for their Series A round,” says Liddle.

Liddle outlined other initiatives that ENYA believes would boost start-ups, job creation and tax revenue, including changes to unemployment welfare so start-up operators could access the payments, and government-guaranteed bank loans for start-ups.

He says the ideas received a positive response from their audience, which including Liberal deputy opposition leader Julie Bishop and representatives from the office of Communications Minister Stephen Conroy.

“The next step is continuing to work closely with [Parliamentary Secretary to the Treasurer] Bernie Ripoll’s office as he’s been championing our ideas and he’s going to help see what is available by funding requests,” says Liddle.

Liddle will lead a team of 22 young entrepreneurs to Russia next week, as part of the G20 Young Entrepreneurs Alliance Australia.

“We’re off to Russia next week but then we have a 12-month runway to the next G20 summit in Australia, so we’ll be campaigning nationally for these ideas,” says Liddle.