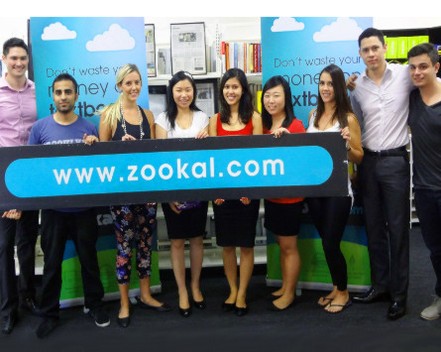 Zookal, based in Sydney, was founded by five students from the University of Technology, Sydney, including 27-year-old chief executive Ahmed Haider.

It allows university students to rent – rather than buy – their textbooks, potentially saving them thousands of dollars. Students can also make money by reselling their old books back to Zookal.

Other services include a marketplace for notes, where students can buy and sell study materials.

The founders started the business with 300 books. It now has a stock of about 10,000 books, and annual revenue is expected to pass $1 million within three months.

While Zookal is often hailed as a student start-up success story, it has come under fire from publishers, which have accused the young company of copyright infringement.

Haider has dismissed the claims as an intimidation tactic.

“We don’t breach any copyright laws. We have PricewaterhouseCoopers as our accountant and lawyer, and they’ve checked it all over to make sure everything is above board,” Haider says.

“The publishers are more concerned about digital access codes that do come with the books.”

But according to Haider, Zookal ceased renting out digital material a year ago. He says the furore hasn’t affected the company’s image.

“If anything, it’s been positive. Some of the really top investors and entrepreneurs got in touch with us [to offer their support]… The customers as well have given us a huge amount of support,” he says.

His comments come after Zookal raised $1.2 million from Filtro Investments, based in Silicon Valley, where Zookal spent two weeks talking to potential investors before securing the funds.

“We have very strong connections to some of the Australians over there as well as some of the community there,” Haider says.

“When we actually arrived, we realised those connections weren’t as useful as we thought. It was really a matter of us getting out there.

“I think traction trumps everything. You can know everyone in the valley and be there for six months and not raise a single dime.

“There are some start-ups that go there with traction but don’t have the right network base and can’t get in front of people. You need a combination of the two.”

Haider says the Zookal team spoke to anyone they could in order to line up meetings with investors.

“We were talking to people at the laundromat next to us – his brother was the owner of a VC fund,” he says.

“It was a very interesting place over there. It operates quite differently to Australia because pretty much every single person is involved in start-ups in some way, shape or form.

“Throughout the day, we would attend as many events and seminars as we could. All through the night, we sent emails to as many VCs as we could get a hold of.

“We managed to get 40 meetings back to back. A lot were a waste of time but we were getting closer and closer to the deal.”

“It helps we had a bit of a Silicon Valley connection – the co-founder of [US textbook rental service] Chegg. They’ve raised $250,000 from… all the top tier funds,” Haider says.

Haider says the deal with Filtro Investments was a long and arduous process.

“The meeting was quite long. They definitely do grill you and make sure you know your stuff inside out,” he says.

“[But] I think if they agree to meet with you, that’s a really positive sign.”