A flat white and a Chiko roll: Why you shouldn’t bite off more than you can chew 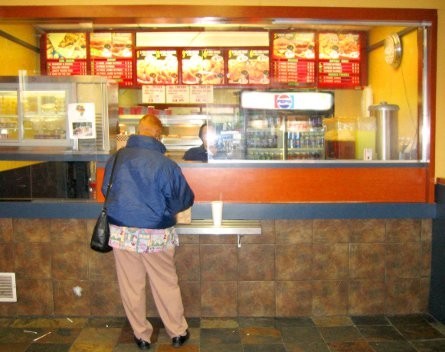 Over the weekend, while cruising down the highway out of Parts Unknown, your humble correspondent felt like having a quick takeaway snack. Unfortunately, the car park at the national fried chicken chain franchise was overflowing, with a traffic jam forming in the drive thru.

Thankfully, Old Taskmaster remembered one nearby businessperson who doesn’t have to worry about having to deal with too many customers – or any at all, for that matter: John, the owner of the Super Rooster.

Now, as long-time readers will recall, John found himself with a paltry future selling poultry after he invested his retirement nest egg into buying a chicken shop called the “Super Rooster” – only to find out that national fast food chicken chain was opening a shop down the road. For newer readers, you can find the full tale of woe here.

Pulling into the Super Rooster car park, Old Taskmaster immediately noticed something slightly different about the place. Half the window was still painted with the original cartoon rooster, wing/hand in a V for victory sign, surrounded by out-dated Pepsi-Cola and Chiko Roll logos.

But the other half of the window now dutifully informs the viewer that the “Super Rooster Cafe” is now open, offering sandwiches, espresso coffee, focaccias, light lunch options and all-day breakfast.

But, stepping through the PVC plastic strip curtains over the doorway, it quickly becomes apparent the cappuccino crowd aren’t exactly racing to find this local “cafe”.

Perhaps it was the distinctive smell of a lukewarm, battered animals deep fried in lard. The canary yellow plastic furniture with matching 1970s brown take away shop tiles was another clue. Then there was the not-quite-Foghorn Leghorn mascot painted on the wall. Still glued to the side of the soft drink fridge is an original decal of a smiling Michael Jackson – from back when he had a nose – slowly fading to his ghostly latter-day hue.

A neon blue bugzapper over the door still electrocutes any flies that dare come too close.

The only thing that has changed inside since last time Old Taskmaster visited is that the original McDonald’s style overhead menu behind the counter has now been joined by a series of chalkboards along the side wall.

“Welcome to the Super Rooster Cafe”, the top of the chalk boards reads.

Meanwhile, the menu behind the counter dutifully recounts the contents of the bain marie below. There are faded pictures of fried or steamed dim sims, chips, wedges, a chicken souvlaki, chicken burgers with lettuce that wilted weeks ago, Chiko rolls, potato cakes, a crumbed thing that might be seafood, nuggets and chips. In the background, a row of chickens slowly turn on a rotisserie.

The take-away menu, once just a folded sheet of A4 paper, now unfolds like a Swedish backpacker’s street map, listing all the menu items and combinations. You almost feel like you need socks and sandals and a bum-bag to read the blasted thing! Fully unfurled, it’s now as large as a broadsheet newspaper!

“The big chicken franchise up the road was putting my shop out of business, so I decided to become a cafe. Hopefully I’ll start getting some of the morning commuters for a coffee,” John explained.

Well, while wishing John the best of luck with his business, Old Taskmaster remains sceptical about whether the “Super Rooster Cafe” concept will work out.

John knows his business isn’t viable as a take away shop. But he’s not willing to put the capital in to renovate his shop into a proper cafe either. Instead of focusing on doing one thing really well – either being a family-friendly local takeaway or pivoting to be a cafe – he’s trying to do everything. And failing badly.

Generally speaking, diversification doesn’t work. Just ask Pacific Dunlop. Trying to spread to too many areas is more likely to see you spread too thin – especially if your small business has limited resources as it is.

So are you trying to do too many things at once – like John with his take away chicken shop and cafe? If so, it might be worth thinking about scaling back your offering.

Get it done – with focus!