A moon landing, a moment of genius and a game-changing moment 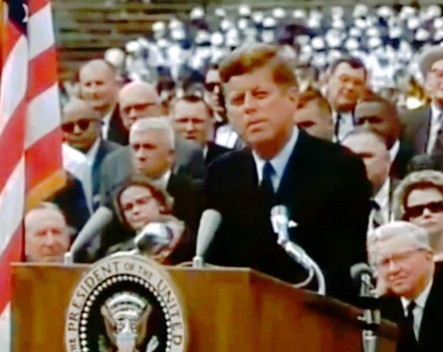 Here’s a slightly philosophical question to ponder for a moment: What is a genius?

But then again, you might be able to memorise and rote learn many facts, but not fully comprehend what they all mean. If you have memorised that “12 x 12 = 144” by rote, but can’t figure out “12 x 14 = 168”, you’re not a mathematical genius. You might know many things, but that doesn’t necessarily mean you’re intelligent.

Perhaps it’s the ability not just to remember information, but to be able to draw new conclusions from it. After all, the Latin root for intelligence – “inter-legere” means to pick out or to discern.

But what if every conclusion you draw falls into a narrow orthodoxy? Your every new initiative falls in line with how things are done within the rigid rules of a particular corporate bubble?

What if your conclusion to the suggestion of a new idea is always to justify the phrase, “Sorry, that’s not how the industry works!” What if it’s used to uphold a monoculture of inertia in your business? You might be clever, but that doesn’t make you a genius.

Well, for what it’s worth, Old Taskmaster says genius comes down to two things.

The first is the ability to deliver a game changer; a product, service or performance so brilliant it not only changes an industry, it changes how people think about an industry or other field of endeavour.

The model T Ford was a game-changing product. By using mass production to deliver a car to people who otherwise couldn’t afford it, it forever changed how the masses thought about transport.

Game-changing products are inherently risky. They require the second part of genius to succeed. If you create something different for the mere sake of being different you could end up with a Telecom Computerphone.

So what’s the second part of genius? Doing something better than the casual observer could even imagine it being done beforehand.

It’s not just brilliant, it’s brilliant in a form that wasn’t anticipated or predicted by most observers ahead of time.

Who would have predicted the development of a theory of radioactivity or the discovery of radium before Marie Curie? Who knew they wanted a portable MP3 player with a click wheel before Steve Jobs’ iPod. Both are, in different ways, examples of genius.

If you want another example of genius, think about John F. Kennedy’s “we choose to go to the moon…” speech.

Now certainly, there were many things people were agitating for in the US during the 1960s. From civil rights to the counterculture to second wave feminism to the Cold War to nuclear proliferation, there were a range of issues and movements that got the nation fired up.

Before Kennedy’s speech, on the list of issues concerning the nation, it’s safe to say manned space flight was not a high priority. The speech was a game-changing moment. And its accomplishment within a decade – as promised – was a sheer act of genius that few people imagined they’d see within their lifetime. It certainly changed the national conversation.

So what is your business striving for? Don’t diversify beyond your core competencies. Focus on creating game-changing products and the areas where you can be genius.