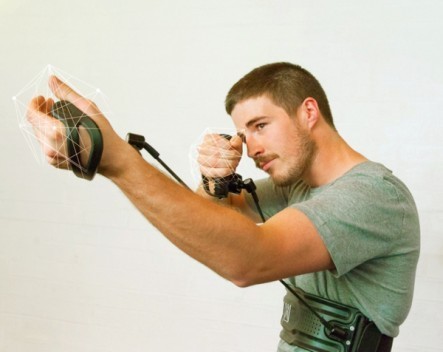 An Australian tech company called The Realm has created a new motion tracking control system with force feedback that co-founder Matt Long says will give gamers a more immersive experience – along with a calorie-burning workout.

“For example, if you try to slay a dragon in a game, you will only stop the dragon if you use enough force,” Long says.

“It measures your force by working out the resistance. It knows how much force it takes to move from point A to point B. It works with Kinnect or a camera, and the sensors in the camera that feed back to your computer, phone, or smart TV.

“In the past few weeks, we’ve also integrated it with Oculus. Everything you do in the real world works with resistance. While Oculus gives you a level of immersion that points your vision in another world, this puts your body in the world as well.”

The Realm’s recently launched Kickstartercampaign seeks to raise $150,000 for its controller, known as the Realm System, which Long says is enough for it to break even. He says it also needs to get the software development kit (SDK) for the device into the hands of at least 60 developers in order to succeed.

“The original inspiration was as a health intervention for people who are sedentary and aren’t going out swimming or running. A university in the UK spent five years coming up with technology that could track or measure 3D force,” Long says.

“The resistance hardware was invented in Australia by my brother-in-law, which is how I became involved. That was a technology already being used, but not with computers. The university researchers who did the digitisation came across his fitness product.”

“We’ve spent 12 months developing the SDK, so we needed to make sure the SDK is ready. Plus we’ve been working on a series of games that can demo the technology, so even though we’re not game developers, we’ve created some games for it.

“[Kickstarter] gets the technology out to the world without needing to have 1001 meetings. It’s a platform where developers do look, and gaming projects appear.”

“We’ve been through quite a few prototypes and we’ve done testing durability… The factory is standing by ready to ship, and we’ve even done things like use medical-grade rubbers so there’s no risk of [allergic] reactions.

“The path is to get into the hands of developers…, go to market to see how much interest there is, possibly look at a capital raise later in the year, and gear up for the international market.