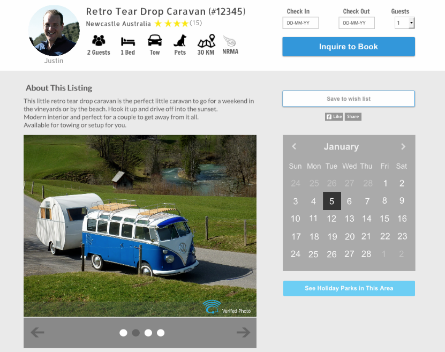 Startups based in regional areas should join an accelerator program or partner with local universities or corporates in order to improve their chances of launching a minimum viable product, according to the founder of an online marketplace shortlisted for the 2015 StartupSmart Awards.

Justin Hales launched Camplify in November last year, a startup allowing caravan owners to rent their vehicles out to travellers looking to go on holiday.

While the startup has only been operating for a short amount of time, there has been no shortage of hurdles it has had to overcome. Chief among them is the lack of a startup ecosystem in Newcastle, unlike cities such as Melbourne and Sydney.

“So when you’re just starting out with an idea it’s hard to find the right people to work with. So an accelerator for us was critical because that put us in touch with the right people to talk to from a mentor perspective. It also put us in contact with a corporate that we could work with. Partnering with a corporate is one way to make sure that you have a success right off the bat.”

Startups from regional and rural areas also have a tough time finding the right talent, as well as a cheap desk to work from.

“Just being able to find somewhere to work from is an issue – there are no real co-working spaces,” Hales says.

“So we’ve had to reach out to the community and say have you got some areas we can work from for six months when we’re just starting out. We’ve been able to get some assistance from Newcastle University to do that.”

Internet speeds are also a challenge. However, Hales believes this issue will ease over time with the rollout of the NBN.

“Certainly we don’t have the speeds that we have in Fishburners, for example, but there’s a few places where we’ve been able to get access to decent speeds – especially Newcastle University,” he says.

“But with the rollout of the NBN we’re hoping there won’t be an issue long term.”

Joining Camplify as a finalist for the Best Regional Startup category in the 2015 StartupSmart Awards are workplace health and safety startup Safety Culture and enterprise software startup Konveen.

The winner of the Best Regional Startup category will be announced at an event in Melbourne on April 16. You can buy tickets here.

Great article, hope you can do a similar one for us at http://camp-spots.com

only fair am i right?