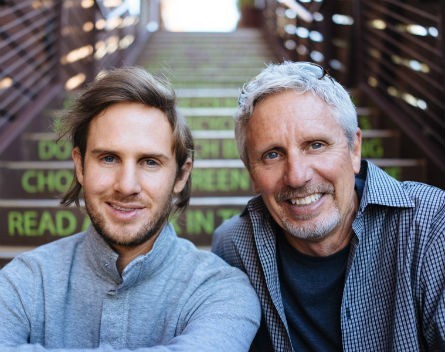 Australia is about to see the dawn of micro-investing with the impending launch of US startup Acorns, and co-founder Walter Cruttenden says it could be even more popular here than in America.

Australia will be the first country outside of the US to be able to use Acorns’ micro-investing platform with a beta phase beginning in November, before the official launch in January.

The reaction in Australia has already been overwhelming, Cruttenden tells StartupSmart.

“What we’ve seen in sign-ups is that it has actually been a little faster than what we had in the US, and we had a super successful beta and launch in the US,” he says.

“We’re very pleased with that.”

An electronic piggy bank in your pocket

Acorns is a smartphone app that allows users to invest electronic ‘spare change’ in five diversified portfolios. It can automatically take the leftovers from small daily transactions and invest them.

Users can also set a recurring investment outside of this, and contribute lump sums whenever they want.

This new form of micro-investing, facilitated and simplified by technology, is set to be a major global trend, and Acorns is at the forefront of it, Cruttenden says.

“Micro-investing is going to be a huge trend. It’s making it easy for a lot more people to invest,” he says. “It’s an area for people to watch, and it’s going to spread around the world. It’s nice to see Australia adopting it first.”

“Micro-investing has the ability to do all these wonderful things through investing in the background of your life, and it opens up a whole new demographic.”

Acorns has enjoyed huge growth and success in the US market since it launched a little over a year ago. Users have saved over $US25 million through the platform, and it now boasts over 700,000 members, a number which is growing by about 100,000 month-on-month.

Cruttenden says they’ve received attention and requests from “every major country” but centred on Australia for its first expansion.

“We launched a little over a year ago in the US and it just went ballistic,” he says. “It wasn’t more than a month or two after the launch that the international interest started to come in.”

It’s all about Australia’s similarities with the US, both in terms of business and culture, he says.

“We decided to be very careful and deliberate and to start in a country that we can really relate to. That’s why we’re starting with Australia,” Cruttenden says.

“This is the dawn of micro-investing. It looks like it’ll be as successful as it was in the US. Proportionally you guys have signed up faster than in the US.

To facilitate a quick and painless expansion Acorns have partnered with local financial firm Instreet Investments to create a joint venture where all the profits will be split 50/50.

This has helped immensely with navigating the regulatory minefield, Cruttenden says, and made a process that took nearly two years in the US much shorter.

“We were doing a new and novel thing in the US,” he says. “It didn’t take us that long in the US because Instreet already had the basic licences.”

“If we went down there and set up our own shop and had to start from scratch in getting the licences, it would’ve taken well over a year. We didn’t want to wait that long because it’s a terrific product and we’re getting demand from all over the world.”

Acorns will encounter some local competition though, with some Australian startups also utilising the concept of electronic spare change.

SnapSave takes this money and transfers it to a savings account. FirstStep also operates in much the same way as Acorns, investing the change in a range of portfolios.

Acorns will be charging “less than $2” per month for accounts with less than $5000, while FirstStep will instead by taking a 1% fee per year for accounts under $2000. The Australian startup is aiming to launch early next year as well, but will find the going tough with the big international player setting up shop before then.

Acorns is well ahead of the pack, Cruttenden says.

“There are a lot of similar situations in appearance,” he says. “We don’t know of anyone that has built the micro-investing platform and engine.

The micro-investing concept is firmly targeted at a young market that would not normally invest.

“It’s primarily a millennial market for first time investors,” Cruttenden says. “We’re offering it by breaking the increments down to tiny, spare change that you can get started with.”

“That’s something that naturally appeals to young people, and people that don’t like to deal with a lot of stress.”

The recent market volatility and crashes will only serve to push people towards smaller forms of investing like Acorns, Cruttenden says.

“Our product is perfect for this,” he says. “When people get concerned and the market takes a bit of a dip, they don’t want to commit lump sums until things are better.”

“When you have an automatic investment tool you’re buying in all kinds of markets and not missing out.”

Both sides of the fintech equation

The fintech startup scene is expanding rapidly in Australia and around the world, and Cruttenden says the secret is to ensure your team has both the tech and the financial side of the equation.

Cruttenden brings decades of experience on the financial side, and he found his own son, Jeff, to contribute the coding side of things.

The father-and-son pair launched the startup eventually last year, and Cruttenden says it paid to wait until it was perfected.

“We delayed the launch several times because the design wasn’t perfect,” he says. “It got to the point internally where we were just saying ‘get the thing out’, but my son was adamant about the design, and he turned out to be right.”

“Companies like Apple have proved that it’s not enough to just have a box that computes. You have to have a beautiful way of going it that makes it easy for the users.”

The duo make a great team, Cruttenden says, and there’s only one slight problem.

“The only difficulty is turning it off when we’re at home having dinner,” he says.”

“We tend to work a little too much.”