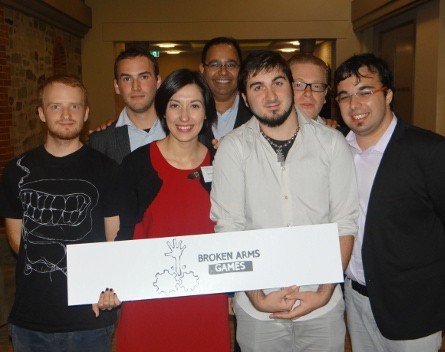 To break into the mobile gaming market, you have to understand the science of the medium, says co-founder of Adelaide-based startup Broken Arms Games, Elisa Farinetti.

Broken Arms Games were one of eight graduates of the ANZ Innovyz START accelerator’s fourth program presenting at a demo day in Adelaide yesterday, and is currently working on Kaboom Monsters, a fantasy card game for mobile.

Kaboom Monsters uses a freemium model and Farinetti says it’s a fine line developers have to tread to ensure they don’t alienate their users.

“The thing that people don’t understand is it’s not by chance that you become Angry Birds and a success story,’’Farinetti says.

“There is science and study behind everything.”

That’s why Broken Arms Games elected for a soft launch in Italy, Australia and Canada, so they could study their users habits.

“If you are playing some (freemium) games you can feel like the game is milking you like a cow,’’ Farinetti says.

“On other games you don’t feel the same experience and you are willing to pay because you are enjoying the experience.

“You need to find where the player gets more involved inside the game and actually once it’s working you give the player the chance to decide to spend the money.

“The casual gamers; they are actually able to monetize best these kind of players.

“But there are not only casual gamers in the mobile space. People want strategy games, card games, adventure games, card-game-like board games, puzzles, you can really find something different and you can find a way to enter and actually create a successful product.”

Often the narrative is Australian entrepreneurs taking their startups overseas to take part in accelerator programs in other countries, but Broken Arms Games have done exactly the opposite.

Their Italian founders, who studied at a university together in Alessandria in north-east Italy, about an hour’s drive south of Milan, were looking for suitable accelerator programs when they came across the ANZ Innovyz startup program.

In a matter of weeks they gathered everything together and left for Australia.

“From a European perspective, Australia is like a dream world,’’ Farinetti says with a laugh.

“We see the value of a program like this one, people coming from all over the world, and it’s really well connected.”

Over the next few months the team will look for investment, while working with a publisher to develop a multiplayer strategy for Kaboom Monsters.