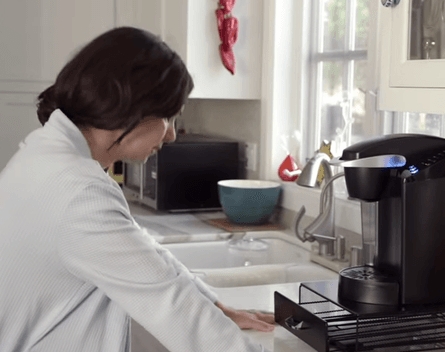 Amazon’s announcement for its new vision of shopping, the Dash Button, was so bizarre, that people thought it was an early April Fool’s joke. The premise is simple. Push a button on a small gadget labelled “Tide” (a US washing powder), conveniently stuck to your washing machine, and Amazon will automatically order and send boxes of Tide to your house.

Given Amazon’s history in this area, it shouldn’t have come as a surprise that the Dash Button was for real. It follows on from the largely unnoticed Dash barcode reader that allows the shopper to take an inventory of their household goods to re-order them from Amazon. It also succeeds the unsuccessful Fire smartphone one of whose main features (Firefly) was being able to point the phone at objects, have them recognised, and order that object automatically from Amazon.

And then there was Echo, the voice activated home automation product that ostensibly does all sorts of useful things, but mainly allows you to buy things from Amazon.

Eventually of course, these individual packages that are ordered through phones, buttons or other devices, will be delivered by a personal drone as part of the Amazon Prime Air service.

Amazon’s shopping vision of the future has so far been met with everything from indifference to outright disdain. Sales of the Fire phone have been very poor and this has presumably prompted Amazon to release new technology like the Echo and Dash Button on an invitation only basis. Even so, the devices signifies where Amazon is hoping to push consumers to meet its ever growing need of keeping them shopping with Amazon for everything they need. In particular, it is driving its business to grow its membership of Amazon Prime. This service already accounts for 50% of Amazon’s sales, luring users with free shipping and other perks like unlimited access to books, TV and movies.

The problem Amazon faces however is that they view their consumers in a way that is epitomised by their promotional video for the Dash Button.

In the video, the mother is shown using the same (heavily) packaged products repetitively and unthinkingly. It is like watching the on earth, domestic equivalent, of astronauts eating space food. The family eats packets of processed macaroni cheese, drinks bottled water and uses individually packaged coffee pods. “Don’t let running out ruin your rhythm” the video proclaims as the mother’s frustration at running out of coffee pods is reversed on delivery of a packing box containing more pods from Amazon.

It is hard to imagine the average household having Dash Buttons stuck to every surface in the house, indeed, covering the fridge. Consumers also do not normally limit themselves to just one specific product in a given category, with price promotions being a heavy factor in what they buy. The Dash Button concept also ignores the fact that most grocery shopping, in the US at least, is so-called “occasion” shopping, with only 23% being for re-stocking items. There is also the fact that in other countries, like Australia, people actually like to shop, and do so at least twice a week on average.

It is also hard to see how Amazon makes the delivery of individual items like a replacement box of washing powder, economically viable or environmentally sustainable. Given that there is already a problem with the quantity of packaging resulting from online shopping, services like Amazon’s Dash Button, if it became popular, would quickly escalate the problem.

Then of course there is the privacy issue. Although the Dash Button is less insidious than the Echo which potentially listens to every conversation in a house waiting for a command, it still has the potential to reveal more information about individuals than people suspect. This is because it is designed to be actioned when there is a perceived need, which is most likely to happen when things are actually being used. At the very least, this information could then be used to target users with specific ads.

Amazon’s forays into testing the future of shopping may be limited experiments and may never get rolled out to the general public, or even be successful if they are. They do point however to a company that is increasingly unable to convert its massive enterprise into one that consistently makes profits. It is hard to see Amazon’s currently strange vision of the future of online shopping doing that for them.