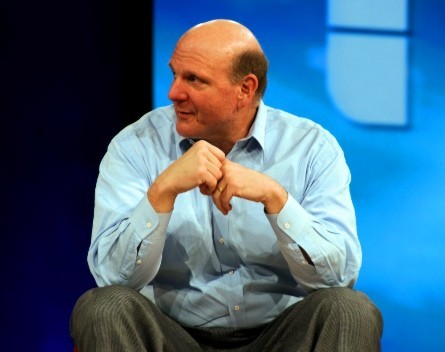 Yesterday, Old Taskmaster talked about outgoing Microsoft chief executive Steve Ballmer’s over-enthusiastic presentation and sales style. For all you young’uns with short attention spans, here’s a music video that basically sums it up:

Of course, there were bigger problems that cropped up in Microsoft under Ballmer’s watch than an overzealous presentation style.

Part of Microsoft’s problem has been the evaporation of the PC market, especially after the release of Windows 8. PC sales were down 13.9% in the first quarter of 2013 year-on-year, and down a further 10.9% during the second quarter. Dell suffered a 72% collapse in quarterly profits. HP’s consumer device revenues were down 22% in just one quarter.

Of course, Apple, Samsung and Google have been rolling in smartphone, online services and tablet cash as the PC dollars dried up. Some people say Microsoft missed this bonanza because it was late to the game. But really, that’s not the case.

The truth is Microsoft came up with a knock-off of GO Corporation’s PenPoint OS (released in 1981) and the GRiDPad (1989) tablets years before Apple released the iPad. They released the first tablet version of Windows – known as Microsoft Tablet PC – around 2001.

Likewise, Microsoft said “me too” to smartphones well before Apple did with smartphones, first releasing Pocket PC back in 2000. Sure, it wasn’t quite a Nokia N9000 (1996), but it was a fairly early imitator.

Likewise, in Microsoft’s bid to monopolise the entire software industry, it managed to beat Google to market in many product categories. For example, it purchased the predecessor to Outlook.com (then known as Hotmail) back in 1997. Meanwhile, Google wasn’t even founded until 1998 and Gmail wasn’t launched until 2004!

The problem was not that Microsoft was late to the ball on these product categories; it was that its execution was terrible! Even where Microsoft was a fast copier, Apple and then Google/Samsung came in later and stole its lunch!

A particular weak spot was revealed almost every time it decided to sell its own hardware, instead of getting someone else to sell it. The Zune and the Kin both failed.

Despite knowing this weak spot, for some reason Microsoft created a stockpile of its own tablets, known as the Surface RT. These tablets run a special version of Windows that was incompatible with most Windows apps.

Well, Microsoft ordered six million of the things. It spent $US898 million advertising them. When only around 1.7 million sold, the company took a massive $US900 million writedown.

Ballmer hoped he could turn an inferior product into dominant players by leveraging Microsoft’s desktop PC monopoly. The tactic worked for Microsoft during the ‘80s and ‘90s, when it pushed Excel against VisiCalc, and Word against WordPerfect, and MSN over ICQ, and Windows 3.0 over GeoWorks, and Encarta over Britannia, and Internet Explorer over Netscape.

But by the time Ballmer took over in 2000, the tactic no longer worked. The reason was because Microsoft, under Ballmer, was far too broadly spread. Like Pacific Dunlop in the ‘70s and ‘80s, there are whole divisions that have never turned a profit, yet have been kept on life support for years regardless, draining cash from the company.

The message for fast-growing start-ups is simple: Stay focused. As you grow, stick to industries you know well and can execute well in, rather than trying to dominate every product line in your industry.

Otherwise you will disappoint, just like Microsoft under Steve Ballmer.