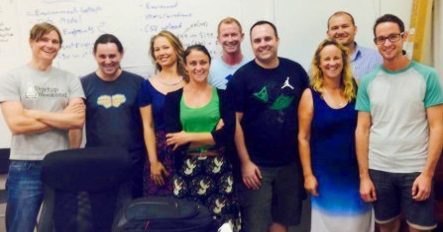 A pledge management system that helps people coordinate their crowdfunding supporters after they’ve hit their financial target has taken out top honours at the Startup Weekend Perth hackathon over the weekend.

Crowdcontrol co-founder Ross Currie came up with the idea after raising $70,000 through Kickstarter for SquishyFort, a pillowed fort building kit.

“Kickstarter campaigns are so intense and are a bit of a nightmare. Then once you hit that goal, you think you can relax but it’s only the tip of the iceberg,” Currie told StartupSmart.

The planned app will enable fundraisers to stay in touch with their supporters and manage their delivery of the promised incentives that drove donations.

“Kickstarter’s backend has some tools, but they’re too basic and don’t allow you to do add-on sales. But you’ve got this great list of customers who are willing to spend on your product, so you can use them more wisely,” Currie says.

The team of seven, formed last weekend, are having a week to relax and re-assess if they want to be involved before they continue to develop the app.

“The judges said they were looking for someone at the front of the wave, and CrowdControl was exactly that,” McCulloch says. “There’s nothing wrong with ordering coffee from the iPhone but this batch were engaging deeply with their environment, seeing big problems with big markets and realising start-ups can tackle them.”

Startup Weekend Perth coordinator Sam Birmingham told StartupSmart he had decided to cap the group at 70 this time, which had boosted engagement.

“The good things with this cohort were more than 50 participants were new and that means our ecosystem is growing. And we had a much higher student and female participation too, which added to the wisdom and perspective of the event,” Birmingham says.