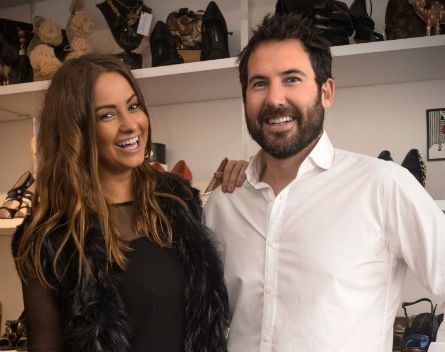 Australian fashion app startup Stashd is working on its valuation ahead of a likely seed investment round in the next few months.

Stashd is a player in the competitive online fashion commerce space, adopting a Tinder-style swipe right to “stash”, saving items in an online wardrobe which can be used to purchase those items, or just for style inspiration. Users can swipe left to trash items they’re not interested in.

The app features items from online stores such as Net-a-porter, ssense.com and Farfetch.com, but wants to grow to include the likes of The Iconic, Asos.com and Zara. It takes a commission on items purchased within the app.

Co-founder Jessica Wilson says the Stashd team has already spoken to investors and is refining the company’s structure, ahead of that seed round.

Stashd isn’t the only fashion app to adopt the Tinder style UX. Flipshop offering a similar experience but for dresses, and Shoe Swipe for shoes.

However co-founder Wilson says she wants to recreate the organic discovery shoppers get in physical stores. The ability to walk into a store and walk out with something you weren’t looking for, and didn’t know you wanted.

She hopes that’s what will make Stashd more attractive than other online shopping apps.

“Fashion discovery, that’s what I want our platform to be about,” Wilson says.

“It gives users the chance, unlike other apps that are limited to categories, to come across items like they do in bricks-and-mortar stores.”

Twenty-two-year-old Wilson is confident, “I know my customers, because I am my customers” she says, but not without reason. Stashd currently has over 100,000 items in the app, users in 85 countries and has been voted as one of Apple’s best new apps in 11 countries, and featured as a top 10 lifestyle app in five different countries.

She’s particularly pleased with user engagement rates, 30% of her users are classified as ‘power users’, that is, they’ve opened the app more than 100.

Wilson has worked in the fashion industry in Sydney, New York and Paris, and it was while working at New York Fashion week that she noted the increasing prominence of online fashion identities, and realised there was an opportunity in the space.

After a trip to Silicon Valley, she returned to Australia and began work on Stashd at the Fishburners co-working space in Sydney, where she met co-founder Peter Neill.

“For someone who doesn’t have a background in tech, it’s amazing,” she says of Fishburners.

“I could just ask the person next me, or if I have an idea, how to approach it. Being a young entrepreneur, there’s a lot of mistakes I have made, and probably more I would have made, if I couldn’t do that.”

She says more needs to be done to encourage young people to consider entrepreneurship as a career.

“I really think people my age have the ability to disrupt industry,” She says.

“We have such a creative and fresh take on the world.”