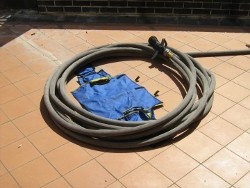 An Australian firefighter has sold his invention, a system that deploys hoses more quickly, to the London Fire Brigade, a little over two years after he devised the idea.

Sebastian Jacobs has formed Quick Lay Fire Attack with four other directors in order to patent the invention, with plans to protect the idea in 142 countries ahead of global expansion.

Jacobs’ innovation, the Attack and Lay Packs, are designed to eliminate kinks and twists in firefighters’ hoses, a problem that regularly hinders attempts to tackle blazes.

The Attack Packs are carried on firefighters’ backs and are deployed when water is pumped into the bag.

Crucially, the hoses are coiled rather than rolled, reducing the chances of it becoming kinked and meaning the full length of hose can be deployed in a neat coil in locations such as a balcony, jetty or  high rise stairwell.

Different to the Attack Pack, the Lay Pack deploys hose on-the-fly or as the firefighter walks, meaning the hose can be laid as quickly as the distance can be covered.

Jacobs, who is still working as a firefighter, pitched the solution to the London Fire Brigade who then purchased 20 units as a trial. Assuming the trial is a success they will outfit the entire London Fire Brigade fleet, the third largest fire fighting operation in the world

He also has a trial period with the NSW Fire Brigade and a Rio Tinto mine in NSW for the devices, which he is selling for $350 each, and is set to embark upon a sales trip across Asia, Europe and the US to secure further orders.

Jacobs, who says that he aims to sell 2,000 units across the world this year, says that he was inspired by seeing firefighters in the US.

“Traditionally, you roll hoses out like bowling balls,” he explains. “Hose tangles are considered part and parcel of being a fireman. We lose far more property than we should due to hose tangles.”

“I saw how they do it in Cleveland – they coil the hose a metre at time and it then deploys. They don’t use the backpack though, which makes it more like a parachute. If you don’t pack it properly, it doesn’t deploy.”

“The Attack Pack was designed initially as a quick-fix. However, through 12 months of research we discovered that globally there’s no standard practice in fire hose deployment.”

Jacobs tasked his mother with making an initial pack for the invention and realised that the product could have wider uses than just in fire departments.

“Anyone can put water in and it works,” he said. “Therefore, it would be good in an emergency response with people who don’t have much training. We can sell this to cruise ships, for example, who use their waiters as firefighters if there’s a fire on board.”