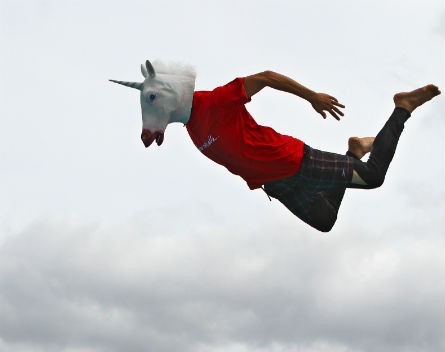 The Australian digital economy will represent a 3.7% share of Australian GDP in 2016, according to Statista. While the number is encouraging, we are well behind countries like the UK (12%), Japan (5.6%) or the US (5.4%). Even the developing market average is 1.2% higher.

Why is this important? Well, it’s a question of the future. Currently, our economy heavily relies on natural resources, manufacturing, and finance. While this is not a bad thing, the world is changing fast, and we are in a technology revolution that has lasted well over 30 years. For example, nearly 100% of the so-called Unicorns – billion-dollar companies founded in the last decade – are technology companies.

What all of these companies have in common is that they were originally startups which either created an entirely new market or rewrote the rules for an existing one. Uber is currently disrupting the taxi industry; Spotify is disrupting the music industry; Airbnb the hospitality industry and so on.

Survival of the fittest

The world is changing faster than ever before. We live in a time where we are seeing a major shift in the economy, and as Darwin pointed out, “It is not the strongest or the most intelligent who will survive but those who can best manage change.” And this change is driven by innovation.

For example, Australia is the world’s largest exporter of coal, a commodity mostly used for energy production. Today, the cost of solar technology is dropping dramatically, and it’s inevitable it will take over the energy industry. For context, if only 1/18th of the Sahara Desert was covered with solar panels, it would make enough power for all of Europe.

If our economy heavily relies on the 20th century industries alone, eventually a startup will come along and disrupt the sector. The only question is whether the next Google, Apple, Tesla, Spotify or Airbnb will come from Australia or somewhere else.

Startups are not small businesses

To build a startup-friendly economy, it’s not enough to just ‘support’ entrepreneurship. Startups are different from traditional small businesses. Unlike SMBs, startups are high-risk undertakings designed to grow incredibly fast. The main goal of a startup is, typically, world domination.

In most cases, startups target new or fast-growing markets, with either an innovative product or business model or both! They need to capture the market fast to establish a leadership position.

As a result, they have completely different financing requirements. They require huge upfront investments to invest in product development, marketing and the recruitment of top talent.

All of this also means the failure rates are significantly higher compared to SMBs. For example, among the web and mobile startups the survival rate is less than 8%. In other words, to build a huge company, a startup entrepreneur must be allowed to fail several times.

The majority of Unicorns (around 66%), are coming from the US and it is not surprising why. Raising venture capital finance is much easier than anywhere else, and the huge VC industry makes it possible to meet the financing needs of the startup economy. In comparison, the total value of Australian VC investments in 2014 is $516 million. In the US, the figure is $48 billion. Almost 100x higher.

Another factor is the attitude towards the entrepreneurial failure. In places like Silicon Valley, failure is considered a valuable experience. The regulations make it relatively easy to start again. I recall reading one statistic showing previously failed entrepreneurs are more likely to get a VC investment at a better valuation than a fresh MBA graduate.

As an Australian entrepreneur, I feel these two elements are missing in our tech ecosystem. And while our economy is strong, we need to manage the change faster. The change is happening and according to the Tech-Ready Countries 2015 Index – jointly published by INSEAD, the World Economic Forum and Johnson Cornell – we’re not among the top 10 yet.

That strikes me as very surprising as the talent, the education, the drive, along with the many great entrepreneurs is here. But we must make sure that the steps are taken towards building an economy that makes it possible for the next Google to be founded here.

Mark McDonald is the co-founder and co-CEO Appster, a mobile app and product development company with offices in Melbourne and San Francisco.