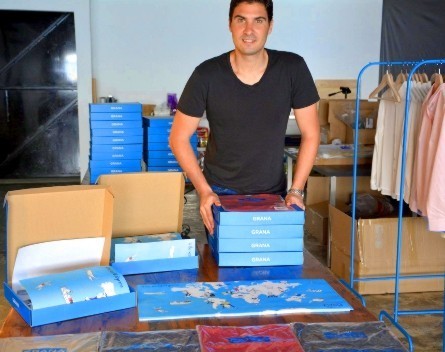 Australian online fashion brand GRANA has just closed a $1.1 million seed financing round from Bluebell Group and a group of respected strategic and angel investors in Australia and Hong Kong.

GRANA operates online only and deals directly with fabric mills, cutting out all middlemen, plus it ships direct from its new warehouse in Hong Kong where the entire team is based.

Investors in the recent $1.1 million seed financing round include Bluebell Group – a large multinational retailing group that has been operating for over 50 years and represents over 100 luxury brands in Asia including Dior, Paul Smith and Jimmy Choo.

Luke Grana, the startup’s 30-year-old founder, told Private Media that during a beta launch in May GRANA sold out a run of 2000 pima cotton t-shirts at $14 each, with the ‘prove points’ playing an important part in securing investment.

“I reached out to investors and said ‘if I can sell 2000 t-shirts will you invest?’, and most said yes. We came off a beta launch and proved we could sell 2000 t-shirts, and then it’s just about closing the deal,” Grana says.

In October last year, Grana moved from Manly Beach to Hong Kong to launch the company, with $150,000 in capital from previous ventures.

“I’ve been working on the concept for over a year – it’s my fifth business. I thought of the idea when I was back in Australia. I was really annoyed at the quality of fabric in Australian stores and the prices were high.

“I was visiting my brother in Peru and found out a lot about Peruvian pima cotton – a special type of cotton people say is the best in the world. It’s extra-long staple, making it more comfortable and durable than regular cotton.

“I came home with pima samples and gave them to friends and family to wear. I didn’t know a lot about fashion so I worked for Zara for three months and took a job at French Connection.”

The cost of shipping packages in Australia was a key factor in the move.

“Selling online-only meant I could sell good quality fabrics at a low price. I was annoyed with the prices Australia Post were quoting for shipping a 1kg box within Australia,” he says.

“I always knew Hong Kong was a global manufacturing and mega-hub for logistics so I reached out to DHL in Hong Kong to form a partnership.

“DHL offered us next day delivery to Australia at prices lower than Australia Post. They also have five planes going from Hong Kong to Australia everyday so they can offer us discounted rates due to their sheer volume.

“Also, DHL were very interested in supporting GRANA as a new online only e-commerce brand. The other major draw card to move to Hong Kong is that we have the potential to ship to a global market.”

GRANA currently ships products to eight countries and plans to open up shipping to over 20 countries soon, all direct from Hong Kong. Over the past two months, Grana has also hired a team of seven people to help scale the brand globally.