Australian startup wins an award for its augmented reality soundscapes 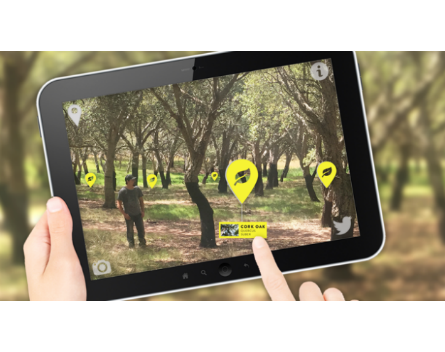 An innovative augmented reality app called Arboretum, which overlays location-aware soundscapes over the National Arboretum, has been named as one of the joint winners of NICTA’s Digital Canberra Challenge.

The ARboretum app was created by APositive, a digital design studio focused on augmented reality experience design. It shares the $12,500 prize with Link Digital, which created a whole of government open data repository for Canberra images and videos that will be opened up to the public.

ACT Chief Minister Andrew Barr presented the prize to APositive at the DCC Awards Day and Innovator Showcase at the National Gallery of Australia.

APositive chief executive Amber Standley told StartupSmart the app charts your location in the National Arboretum and plays wild sounds native to the country of origin of nearby trees. So, for example, standing near a cedar will produce a Himalayan soundscape, while cork oaks trigger a Portuguese soundscape.

“The brief for the Canberra Challenge was to create a digital art installation, and it was a fairly open brief. A few years earlier, we had the idea of creating a geolocation app for the arboretum,” Standley says.

“We really felt we didn’t need to overlay visuals in the Arboretum, as it is already very visually rich. But there is a lack of sound compared to what you would find in a real forest, especially with the noise from the Tuggeranong Parkway and other visitors.”

The sound library the app draws on was created by a professional sound designer. It uses mini soundscapes within larger ones that change randomly, giving each visitor a unique experience. The app also allows users to immediately access information about specific trees, their origins and significance.

ARboretum from Amber Standley on Vimeo.

“We’ve been around officially for two years, and for a year before that as a sole trader. I originally studied for a masters in digital design. I moved into a research cluster where we were bombarded with requests about augmented reality, and eventually turned it into a commercial venture.

Standley says APositive has worked with businesses on marketing collateral, including overlaying data over signage, posters and digital exhibits. But its projects have also included recreating an 18-pound gun for a World War I exhibition and working with television personality Wil Anderson and a green screen to create a moving artwork.

“I am looking forward to the time when wearables like Microsoft Hololens and Meta’s glasses are more mainstream. These devices will allow us to interact with data in a more natural and social way,” Standley says.

“We can use our hands again, look ahead not down and share experiences with our peers more freely. Augmented reality will be the interface in which we interact with the data served on these devices.”