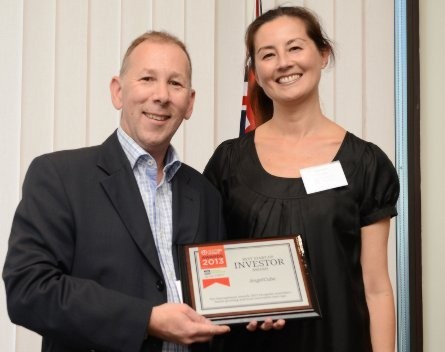 AngelCube founder Adrian Stone has thrown down the gauntlet to investors to do something to address the apparent lack of female startup entrepreneurs.

Admitting that he doesn’t know how to solve the problem, he’s done what he says he can as a VC and told StartupSmart he’ll “write a cheque for those smarter than me that can to do something about it.”

He’s offering an additional $1000 to the top female AngelCube applicant (they already receive $20,000), who makes it into the popular incubator’s program. He notes that every year they’ve had at least one female entrepreneur in the program (so he’s set the bar low), but he wants to encourage more.

If the $1000 is granted, he’ll donate $10,000 to Startup Victoria to look at ways that it can use the money to encourage more female entrepreneurs.

Stone says the caveat means “that female-led teams (at least, startup teams that include a female in a key founder role) need to show that they are indeed willing and able to help other female tech entrepreneurs succeed by applying to AngelCube, then succeeding in being selected into our 2014 program.”

Once that happens, the $10,000 grant, from Stone’s personal money, will be made available to Startup Victoria.

Writing on his blog, Stone said:

“Startup Vic will need to apply this grant, if somebody wins it on their behalf, to programs aimed specifically at supporting (or increasing the number of) female tech entrepreneurs in Victoria during 2014 and/or 2015.

“And, I’m hoping that the person (or people) in Melbourne who do have some ideas on how rebalance the ecosystem here will put their hands up and help Startup Vic light the way on this issue.

I’m also hoping that by leading the way (supported by our cheque), Startup Vic will be able to find corporate and vested-interest sponsors to follow with their own financial and other assistance. It’s much easier to get money if you already have a little.”

Stone is calling on other investors to match his donation.

“I’m not done with this yet,” he says. “I won’t stop until I get other investors to join me in giving money to help solve the problem.”

@mattallen You could start by matching my donation for @StartupVic‘s FTF fund $ for $. I’ll release whatever % you match immed. @founding

@scale_investors can you match all/part so @StartupVic can really get something going? “Balancing the gender divide” http://t.co/YEDcIXsJwh

He was inspired to make the proposed donations when he came across the Founder’s Institute Female Founder Fellowship program, which allows females to apply to the Founder Institute for free ($50 value), and also provide a free course fees to our best female applicant in each city ($1100 value).

Stone he looked at it and thought that he could do better.

“It’s really just a marketing exercise on their part, so I did the same for AngelCube, and then did something bigger,” he says.

Claire Robertson, Founder Institute co-director of the Perth chapter says that the Fellowship program has encouraged female applicants with just over 20% of their applicants being women.

“Within the Perth tech startup ecosystem I’d anecdotally estimate that women represent between about 10-15% of attendees at most startup and technology focussed events, excluding those that target women specifically,” Robertson says. “Based on those numbers I think that the fellowship does produce some incentive.”

Robertson has just returned from the USA with a long list of ideas on how to increase female participation in the sector.

“I think that there’s plenty of scope to increase female engagement in the sector, going forward,” she says.

Startup Victoria chair Leni Mayo says at this stage they would be looking for someone who was working to solve the problem of lack of females in startups to be a chair of a committee on female tech entrepreneurship.

“What we’d do from there is get a clear understanding and articulation of what the problem was, and then how we can solve it,” Mayo says.

Mayo says they are looking for someone passionate about the problem to lead the committee.