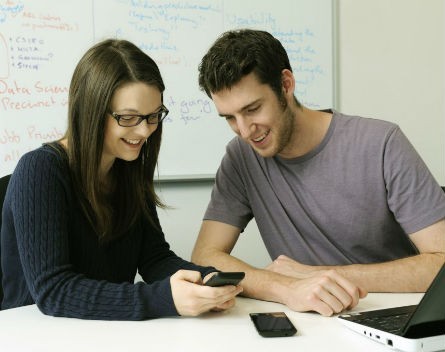 Two Australian health tech teams, one tackling Alzheimer’s and the other looking at student mental health, are hoping to follow in the footsteps of Eyenaemia after being named as finalists in the Imagine Cup global tournament.

The global competition aims to encourage students aged 16 or over to take up coding by demonstrating how technology can be used to create solutions to social problems. It attracts over 100,000 participants worldwide, including the brightest university students from the US, UK, Russia, China, India and Europe.

Last year Eyenaemia, created by two medical students from Melbourne’s Monash University, were crowned Microsoft Imagine Cup world champions by developing an app that allows users to take photos of their eye in order to calculate their risk of anaemia.

The prize included a face-to-face meeting with Microsoft co-founder Bill Gates in Seattle, who praised their app saying their concept had “real promise” and could make a big difference in developing countries, where anaemia contributes to nearly 20% of deaths during pregnancy.

The team has found ongoing success since then, presenting at Microsoft’s Global Impact Forum, the UN Entrepreneurship event, and in the past week, taking out the top prize in STC’s Medtech’s Got Talent health tech pitching competition.

Another Australian team focused on agriculture, Team SOAK, took out the prize in 2008, while food-focused social startup Foodbank Local came third in 2013.

Hoping to follow in their footsteps are this year’s finalists, Team Opaque Multimedia and Team Speakerboxx.

Team Opaque Multimedia is working with Alzheimer’s Australia to develop a virtual reality experience for carers and family members that allows them to experience first-hand what life is like for a dementia sufferer.

Team Speakerboxx has developed an app that allows students to record a private diary, send anonymous messages to a teacher or school counsellor, or chat with friends. The app integrates cloud-based analysis of user recordings that looks for key phrases and can provide immediate support through links to mental health support services.

Microsoft Developer platform evangelist Lawrence Crumpton told StatupSmart Australian teams tend to punch above their weight – with Australia’s spirit of mateship a key factor – and this year’s teams are no exception.

“Right now, even if you study dementia, there’s a gap where you can never really understand what goes on for a sufferer,” Crumpton says.

Crumpton cites the example of a dementia sufferer who used to keep her lights off and blinds closed because she was sensitive to bright light, but had difficulty communicating this – a common situation for dementia sufferers. But her carer, who visited weekly, didn’t realise this and used to open the blinds and switch on all the lights.

The sufferer eventually refused to allow the carer to visit, and eventually had to be hospitalised – a bad outcome both in terms of cost and the patient.

“Now imagine you could take that carer, and put them in the mind of a dementia sufferer. Instead of them needing to remember what they read in a book, you could ask them to do a simple task like opening a door while experiencing the auditory and visual symptoms a dementia patient experiences. They would then know why patients react in the way they do – because they’ve experienced the same symptoms.”

The other team, Speakerboxx, demonstrates how technologies such as machine learning and smartphones can be used to achieve a social or health outcome.

“Azure ML [Machine Learning] is an environment where you can invite others to collaborate and access huge clusters of computing power at a mouse click,” Crumpton says.

“And just look at smartphone use globally. There are more people globally with access to smartphones than any other platform and that growth rate has happened at exponential speed… Medicine is a field where the costs are super-high, because of traditional practices. You combine smartphones and medicine, and the effect is like a match on dry kindling.

“[The Imagine Cup] might have started out as a competition, but it’s evolved to where students in dorm rooms and garages – much like the ones Bill Gates and Steve Jobs started out in – have moved beyond competition into building commercially viable solutions.”