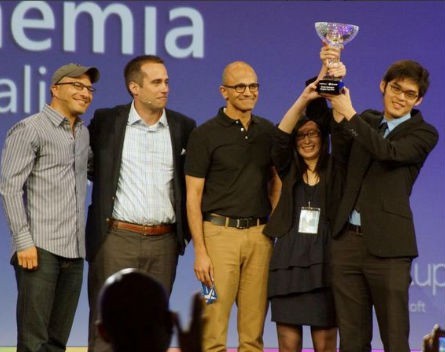 Eyenaemia is an app which allows users to take photos of their eye in order to calculate their risk of anaemia.

Anaemia is a deficiency in the number or quality of red blood cells, which can be dangerous if left untreated. Currently two billion people worldwide suffer from the condition, including 293 million children.

Team Eyenaemia won both the World Citizenships category and went on to beat the other category winners to be named World Champions of the 12th Imagine Cup.

They now get $50,000 in funding to help develop the product and a personal meeting with Bill Gates.

Congrats to @Eyenaemia for winning @ImagineCup! Thanks to you, a selfie a day might actually keep the doctor away. pic.twitter.com/ZOU3MI6e0H

Seah, who is a redditor, says a particular highlight was getting the chance to chat casually with Martin about issues like net neutrality as the teams were being ferried around by bus during the event.

Tang and Seah are both excited by the prospect of meeting Microsoft founder Bill Gates.

“He’s really an inspiration to the both of us,” Seah says. “To get the chance to get his opinion on other things as well, not just technology, but life in general, his thoughts and the future and what he thinks the main challenges that society has to overcome.”

The duo say one of the most important parts of their pitch was the fact they were able to show a working version of the app on a feature phone, an important characteristic to ensure take-up in the developing world.

“Right from the start our vision has always been to have this screening option available in developing countries,” Tang says. “It’s very important to make this accessible, and by putting it on a feature phone it does that.”

The Eyenaemia app has been approved by the National Health and Medical Research Centre for trials at the Mildura Hospital and Cabrini Hospital, to research and further validate the technology.

Currently the Eyenaemia app accurately detects 95% of cases of severe anaemia. The Eyenaemia app will be trialled on patients that are also getting blood tests for anaemia and the results of the two tests will be compared, in order to help improve the app’s detection rate.

“Their simple, yet unique use of technology to solve the real-world problem of anaemia, which affects two billion people around the world, truly showcases Australian innovation at its finest,” she says.