Hackathons really can spur innovation and ignite the “ideas boom” 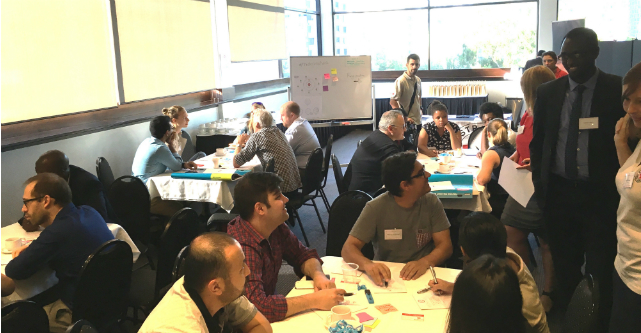 It’s 26 hours into the Random Hacks of Kindness hackathon, and I am on my ninth cup of coffee. We have just over five hours until “show and tell” time, when we need to have a working mobile app.

Among the screwed-up butcher’s paper diagrams, leftover sandwiches and wafts of unshowered programmers in our corner of the office, one member of the group is staging an epic battle between jelly pythons, another is rewriting the video function of our app so that it will actually play video, and the third is having a change of heart entirely.

“Do you think,” he asks, “we should maybe build a solar-powered coffee cart instead?“

This chaotic – but typical – scene occurred during a hackathon in Western Sydney last December. Focused on solving a small but challenging problem, hackathons involve intensive periods of brainstorming, coding, designing, testing – and often much coffee drinking.

Our event was one of the Random Hacks of Kindness (RHoK) series of hackathons also taking place in Melbourne, Sydney and Brisbane. Run over a weekend twice a year, the RHoK events focus on projects with social impact.

They invite “change makers” – community organisations, social enterprises and committed individuals – to pitch a problem to teams of volunteers. At the end of the weekend, a group of judges choose a winning team, and provide all the teams with feedback for developing their projects further.

Hackathons fit neatly with Australia’s recent rhetorical pivot towards technology and innovation. Prime Minister Malcolm Turnbull’s “welcome to the ideas boom” invites the country to “create a culture that backs good ideas and learns from taking risks and making mistakes” and develop ”greater collaboration between universities and businesses”.

Academics have been turning attention to the mechanisms that might enable such culture and collaboration. For instance, QUT’s Marcus Foth has suggested that Australia needs a “skunkworks”. These are spaces of creative collaboration outside of routine organisational procedures that “attract, house, support and unleash innovators, makers, thinkers and doers”.

From their origins as informal late nights run by a handful of technology enthusiasts, hackathons have evolved into well-coordinated, multi-project and sponsored workshops. They include social entrepreneurs, designers, researchers and other professionals as well as coders. They offer the temporal equivalent of a space for collaboration across research, government, industry and community sectors.

But the rise of the hackathon has also invited scepticism. Do these novel “proto-publics” function as incubators for creativity and collaboration, as they claim? Or are they more like a technologically habilitated form of the military boot camp, the corporate retreat or the cult centre?

Do the long hours, the sensory deprivation caused by constantly staring at screens, and a missionary zeal for technology instead induce a kind of collective faith in the object of a “working app”? And what responsibility do hackathons have for the translation of technical outcomes to the kinds of social change they look to produce?

Our own response in the aftermath of the event was one of mild and exhausted euphoria, accompanied by a sense that each of the change-maker teams had developed a tangible product that would be helpful to the groups they were intended for.

Under pressure of the tight timelines, each of the teams had, in their own way, “gelled” over the course of the two days. This was all the more remarkable since we had relatively few experienced hackathoners in our group.

In a research environment, where time for consultation with project stakeholders can be difficult to find, the results seemed especially surprising. The hackathon promotes the idea of more regular, if still sporadic, bursts of high-intensity collaboration across diverse disciplinary and institutional boundaries. It’s neither work nor hobby “but something of both”.

On the other hand, in the days following the event, we also registered a certain degree of scepticism about the “narrowing attention to issues that can be solved in a compressed timeframe”.

In the cold light of day – during the working week that followed – we experienced a distinct anti-climax, as though the beneficial outcomes stemmed from a form of participant collusion during the event itself. It became increasingly difficult to convince others who had not attended the event about the technical and social miracles we had produced in such a short time and under duress.

Each project would also need to address the question of how it would advance the weekend’s work into a product: what would be the fate of these bursts of innovation and collaboration, produced under the effects of self-imposed confinement?

Both euphoria and anticlimax are perhaps understandable responses to the “bootcamp” atmosphere. In this respect, hackathons share much in common with the “intensive culture” infusing research, media, markets and work.

As laboratories for translating ideas into implementation, hackathons hold exciting potential. To become enduring, they will need to prepare organisers, change makers and participants for the emotional rollercoasters that they invariably produce.

As the word “hack” itself suggests, they can involve the transgressive sense of breaking boundaries and making new links. Their role in building innovative cultures requires, though, more than feverish excitement and technological expertise.

Other researchers have begun to study their effects in more detail, charting some of their challenges and benefits. Hackathons have become an “invaluable unique form of life worthy of careful investigation”.

In the current enthusiasm for building cultures of innovation, this investigation is now vital to ensure the broader “ideas boom” doesn’t prematurely go bust.