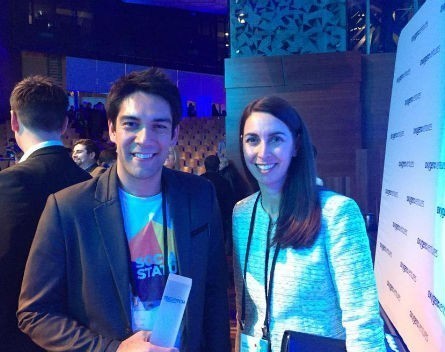 Social Status, a social media analytics platform, which won the Big Pitch earlier this year, has closed a $US300,000 ($412,000) funding round and moved to the United States to take part in the Hackers/Founders accelerator program.

The startup couldn’t come to terms with Oxygen Ventures, the creator of the Big Pitch, which offers up to $5 million for the startups taking part in the final. Co-founder Tim Hill says an agreement was unable to be reached because of differing priorities.

“It was awesome to get in front of all those people, but ultimately we didn’t proceed with Oxygen,” Hill says.

“I know that they’re looking for big investments that they can grow fast and hard, and I think that’s a very valid strategy, but what we were looking for at the time, was more of what a seed or angel round would look like.”

On the night, Hill pitched for $1 million, but ended up raising less than half that figure. It recently closed a $US300,000  funding round from a mix of Australian and US investors.

Now Social Status has moved to the United States to take part in the Hackers/Founders accelerator, a program that follows a services-for-equity model. Startups participating give up 5% equity in exchange for co-working space and “concierge services”, and some of that equity also goes to each startup participating in the year’s cohort.

Social Status appeared recently on Product Hunt, which resulted in increased interest in the United States, and has helped the startup grow to almost 1000 users.

“We had 1000s of visits in the space of a couple of hours, it was just this massive hit,” Hill says.

From January: How to get your startup featured on Product Hunt

At The Big Pitch Hill said the startup was aiming to grow 7% week on week and become a $100 million revenue company in two years’ time. This latest injection of capital hasn’t changed those goals.

“We’ll keep using our user growth and revenue growth targets, both things we’ve really focused on since day one,” he says.

“We’ll be doing that through investment in engineering and marketing. In the time we’ve spent on the market we’ve fined tuned and honed where our value proposition lies.

“We can save marketers a lot of time, and are really narrowing in on that pain point.”