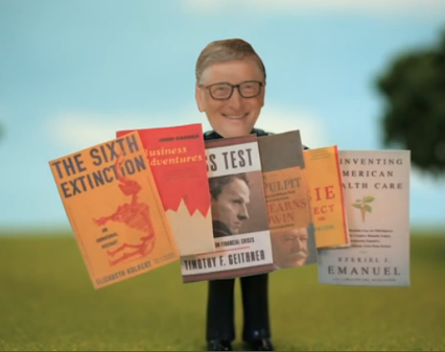 He might be the world’s richest person, but did you know Bill Gates is an avid reader?

The billionaire co-founder of Microsoft releases a list of six recommended books at the start of each US summer. And his endorsements have weight: the books climb up the bestseller charts as soon as Gates reveals his picks via his blog.

While the six books Gates has picked this year are not all manuals for business—there’s a debut novel by a Melbourne author on the list—taken together they give some insights into the mind of one the most successful businessmen of recent times.

Gates says his close friend Warren Buffett first recommended this book to him in 1991, “and it’s still the best business book I’ve ever read”.

“Even though Brooks wrote more than four decades ago, he offers sharp insights into timeless fundamentals of business, like the challenge of building a large organisation, hiring people with the right skills, and listening to customers’ feedback,” says Gates.

“He is also a masterful storyteller, peppering his articles with compelling portraits of everyone from General Electric executives to the founder of Piggly Wiggly groceries … I wish all business writing were half as good.”

While you won’t find a hard copy of Brooks’ book in your local bookshop as it is out of print, the e-book version is readily available.

Gates says it’s ironic that Timothy F Geithner, who was accused of lacking in communication skills during his tenure as the US Treasury Secretary, has written such a good book.

“Geithner paints a compelling human portrait of what it was like to be fighting a global financial meltdown while at the same time fighting critics inside and outside the administration as well as his own severe guilt over his near-total absence from his family,” says Gates.

But despite the ugliness of “the politics of fighting financial crises”, Gates says if more people read about the background of financial crises, it just might make a difference next time around.

Gates says he read a lot about US President Theodore Roosevelt last year, but Goodwin’s book is a standout.

What interests him most about this biography is the central question: How does social change happen?

“Can it be driven by a single inspirational leader, or do other factors have to lay the groundwork first?” asks Gates. While some leaders can make a difference on their own, Gates says Roosevelt’s political reforms only really took off once he had the support of others, including members of the media.

The Rosie Project by Graeme Simsion

It’s high praise for debut Melbourne author and former data modeller Graeme Simsion to make Gates’ list with his tale of a genetics professor with Asperger’s Syndrome on the lookout for a wife.

“It’s one of the most enjoyable novels I’ve read in a long time,” says Gates. “I started it myself at 11pm one Saturday and stayed up with it until three the next morning … It’s a funny and profound book about being comfortable with who you are and what you’re good at.”

Simsion’s book has been published and translated in more than 30 markets since its publication in Australia in early 2013, and the author has a sequel, The Rosie Effect, on the way this September.

The Sixth Extinction: An Unnatural History by Elizabeth Kolbert

Gates’ views on climate change are well-documented, and in the past he has spoken out about the dangers of global warming as well as invested in potential climate solutions. So it’s no surprise that one of the books on his list would be about environmental challenges.

“Natural scientists posit that there have been five extinction events in the Earth’s history … and Kolbert makes a compelling case that human activity is leading to the sixth,” says Gates.

“Unlike a lot of people who write about the environment, Kolbert doesn’t resort to hype. She just lays out the facts and wraps them in memorable anecdotes. It’s a sobering but engaging and informative read.”

Emanuel is one of the architects of the Affordable Care Act, also known as Obamacare, and Gates recommends this book to “anyone involved in the debate over health care, no matter what their point of view is”.

“Although he was deeply involved in its creation, Emanuel is good about making it clear when he’s educating you about the history of health care and when he’s advocating for his ideas,” says Gates. “And unlike a lot of experts, he’s willing to make predictions about how health care will change in coming years.”