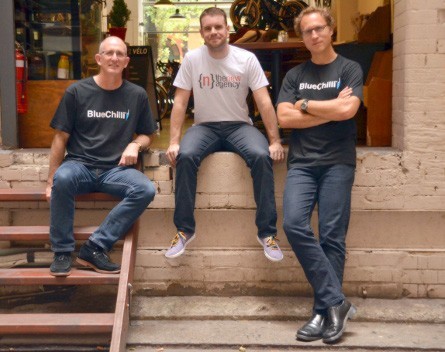 Venture technology accelerator Blue Chilli is acquiring digital agency and incubator The New Agency as part of its plans to grow.

“We have similar mindsets and philosophies, with the same passion for growing the ecosystem. They have an incredible amount of experience that will add a lot to Blue Chilli and my plans for growth,” Eckersley-Maslin says.

“We both believe in selling before you have, in testing and market validation, spending the bare minimum of money to prove a concept. We also all believe in discipline and structure in the organisation.”

Blue Chilli has previously engaged The New Agency team as expert consultants for a couple of years. Negotiations for the talent, assets and database acquisition began a few months ago.

Eckersley-Maslin says the similar approaches has made the partnership their most seamless acquisition so far.

Jones and Burrett will continue to work with their agency clients for a transition period of four months, by which point they should have wrapped up their major projects.

Jones told StartupSmart they had launched The New Agency as a third way to support new start-ups, distinct from the Pollenizer and Blue Chilli models.

“We launched a third way, a lean enough agency model that founders could afford with their measly budgets,” Jones says. “We looked hard for a while at the question of do we raise our own fund and become a direct competitor to Pollenizer and Blue Chilli. Gradually over time it’s made more and more sense to not be a third force and join someone who can use us well.”

Jones adds that combining the two companies’ different approaches has been an enjoyable challenge, foreshadowed by his own connection to Eckersley-Maslin, who he first met at the Awesome Foundation.

“A few of the people in the foundation are hipster alternative types. Seb came in all straight-laced and businessy, asking about goals. We didn’t immediately gel but over time we realised we had similar values, and we were in this game for the same reason,” Jones says.

The agency’s fee-for-service model means The New Agency has learned to be very flexible to work with as many clients as possible, whereas Blue Chilli turns away over 95% of the ideas pitched to it.

“There are definitely cultural differences between the two organisations. Sometimes it feels like the best thing ever and sometimes it’s a bit scary and weird for both parties,” Jones says. “We’re learning their procedures and frameworks, and they’ve had to adapt to our ability to introduce them to new ideas and concepts going forward.”

Jones adds the commute into the Sydney CBD from Newport on the Northern Beaches where The New Agency is based is likely to be their biggest challenge, although they have every intention of continuing to tweet photos of the beaches with the #suckitsurryhills hashtag.