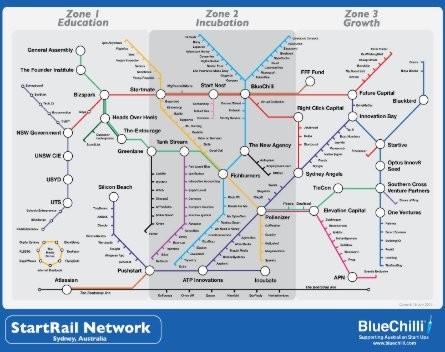 An updated map of Sydney’s start-up sector has been released today by technology investor and accelerator group Blue Chilli.

The map details over 30 different organisations and companies, and more than 100 start-ups, conferences and meet-ups.

Blue Chilli co-founder and chief executive Sebastien Eckersley-Maslin told StartupSmart the map is updated every four to six months, but a major revision of the map, first released in December 2011, was needed to reflect the scene’s significant growth.

He says the density between the first and second map has increased threefold in just two years and is not exhaustive.

“There are a lot more co-working spaces, incubators and investors supporting start-ups at the critical, high risk time.”

The map is divided into three zones and growth stages. Zone One is education and includes groups such as General Assembly, Founders Institute Sydney and universities. Zone two is incubation and includes accelerator programs such as Blue Chilli and ATP Innovations. Zone three is growth and includes investors such as Right Click Capital and One Ventures.

Eckersley-Maslin says this rapid growth is set to continue.

“This growth is likely to continue. We’ll see some places shut down, such as PushStart consolidating, but that’s a healthy thing for an ecosystem,” he says.

“We’ll see ongoing further growth and consolidation of a few, but there will be models that don’t work and that’s fine. Failure is a good thing.”