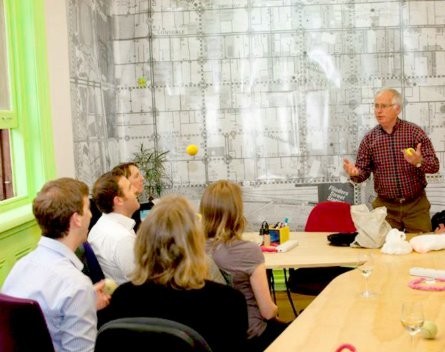 The team at course platform WeTeachMe had been battling away at signing up partners and promoting their platform for over a year when they realised they were at breaking point, and had to to make a change fast.

After launching in 2012, the team of four struggled to gather momentum and realised they’d have to give up or overhaul the product.

Co-founder Kim Huynh told StartupSmart they were struggling to stay strong, with many telling them it was time to move on to the next project.

“I’m quite resilient, but to hear that endlessly, and have really well-respected people in the community say that, it’s tough,” Huynh says. “We kept pushing, if we could get this client or build this feature, maybe it’d work.”

The platform allows people to browse courses from a wide range of providers. Huynh says they knew the idea was a good one, but execution let them down.

“Our current data shows this was exactly the right idea, but we launched what was effectively a massive list. It wasn’t user-friendly and didn’t feel right. We used the word user experience, but I knew the flow wasn’t correct,” Huynh says.

The team lived off their savings for 12 months, with the financial risk of failure playing its part in eroding morale.

“The stress was incredible, and I manifests in really strange ways. We were breaking down in cars, crying midway through meetings with no reason and fighting a lot,” Huynh says, adding the team of four became good at nurturing team members battling burn-out.

As the team leader, Huynh felt the stress intensely and his family and close friends even staged an intervention to try and get him back on track.

“I felt responsible for every single person. I felt I had deluded them to come on a journey with me,” Huynh adds. “You lose a lot of yourself when you’re so focused on only one thing.”

Despite the fact the business was failing, the WeTeachMe team was hesitant to abandon ship as they believed in the idea. But they realised they had to create a completely new product; one that worked for its users.

“To do such a high-risk proposition as a start-up, you need to be a bit delusional. We had convinced ourselves that we were working on something that could work, that we believed in,” Huynh says.

“We made the hard decision to throw everything in late last year. We realised our execution was clearly wrong and scrapped everything.”

Prior to beginning to build the new platform, the WeTeachMe team decided this was realistically their last shot, so they had to get it right.

Despite the pressing need to start bringing money in, the team decided to clear their schedules for a few months, and line up over 500 one-on-one interviews with course providers and serial course students to identify exactly what problems their platform needed to solve.

“We asked them what their biggest headaches were, how we could help, what their businesses magic bullet would be. We got inside their heads, and built the new platform around the problems,” Huynh says.

They launched the new platform earlier this year.

“We signed up on our first few new clients, and the results were immediate,” Huynh says, adding bookings (and revenue) started to flow through the platform.

“The first few bookings turned into testimonials from both course providers and students. We flipped these into larger clients, got more testimonials, which led to even larger clients. The momentum took off and it was magic.”

Despite having over 10,000 courses listed on the site today, Huynh adds it wasn’t until three months ago that the pressure lifted.

“My biggest priority was giving this start-up its best shot at life. There were no holidays or weekends. A lot of my friends complained, and my family as well, but they knew I wanted to make it work,” Huynh says.

It was when he walked in a meeting with a large educational institute and walked out with a signed contract that he knew it was going to be okay.

“To have such a major client say to us ‘we get it, you get us, we want it and need it and will roll it out across multiple campuses’, then I relaxed,” Huynh says. “It’s like when you’re watching a scary movie, and you finally let out a big breath after the terrifying part, and you didn’t even realise you were holding it in.”

The next year for WeTeachMe is set to be a big one. They’re considering investment offers from international accelerator heavyweights, and getting ready to scale their offering rapidly.

“It’s a pretty fantastic new problem to have, trying to work out how fast you can scale. But our team dynamic and thinking has changed. It’s not just about making it work anymore. We have the space to be creative, to be honest and actually have a vision.”

This story is part of our Start-ups are Scary series. If you’ve survived a tough and terrifying moment in your start-up’s journey and want to share what you’ve learned with the wider community, we’d love to hear from you: rpowell at startupsmart dot com dot au