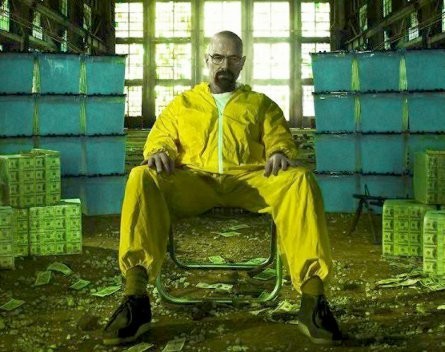 After five years Breaking Bad, one of the most beloved television shows of all time, comes to a close. Viewers will finally get to see how Walter White concludes his own destruction – and whether any of the other main characters will make it out alive.

The finale has already begun in the States, but Australian viewers have a few more hours to wait before seeing how the ending pans out.

For those who aren’t in the know, the series focuses on Walter White, a high-school chemistry professor who turns to cooking high-quality meth to support his family after receiving a lung cancer diagnosis. But his career in crime takes him on a descent into darkness.

Regarded as one of the highest quality shows ever, Breaking Bad has set a new benchmark for thrilling television, in both character and plot.

But there’s more to Breaking Bad than exciting science and character development – there’s plenty here for the business owner to learn.

After all, isn’t the drug trade nothing but a market economy of its own? According to the Bureau of Statistics, the black economy and illegal drug trades are worth more than $30 billion a year. That number is worth several times more in the United States.

You don’t make that much money without being a savvy businessman. The same principles that apply in the legitimate business world remain the same when dealing with black-market product.

Breaking Bad isn’t just a story of exciting plot twists and fascinating characters. The show does an excellent job of integrating the realities of a black-market economy – and there’s plenty here to learn.

Here are seven lessons business owners and entrepreneurs can take away from Walter White and Breaking Bad (but shouldn’t necessarily emulate!):

(And don’t worry – all lessons are spoiler free).

Hold on to a good thing

There’s a legitimate business lesson in Breaking Bad before Walter White even touches a meth lab.

Back when he was a professional scientist, White had a hand in creating a company called Gray Matter. It’s never specified what the company does exactly, although it’s pretty obvious this is a type of research and development firm.

White left the company for “personal reasons” – it’s never specified exactly – and took a buyout of $5000.

But that was a mistake. The company skyrocketed in value to more than $2.16 billion, and even received a Nobel Prize.

White keeps saying he looks at the valuation “every week” and tortures himself over what could have been. This isn’t an uncommon story – plenty of investors know the pain of selling out of a stake early on and then watching the company in question explode in value.

Breaking Bad has a lot to say about creating wealth. But this lesson is probably the most potent – don’t give up on a good thing based on emotions. It usually never ends well.

Gustavo Fring is a legitimate member of the Albuquerque business community. He owns a chain of successful fried chicken restaurants, Los Pollos Hermanos, and is a public supporter of the Drug Enforcement Administration. Gus sits on the board of at least one hospital in the Albuquerque area.

He’s also one of the biggest meth kingpins in the area.

Part of the reason Fring is never suspected by the DEA – (they’re even sceptical after questioning him) – is that he presents the best version of himself. He is articulate, well-dressed and successful. Why would anyone suspect him?

The same goes for the shady lawyer on the show, Saul Goodman. He’s articulate and well-versed in the law. Of course, people suspect he’s dodgy – but as long as he maintains a squeaky-clean image of a damages lawyer, no one can touch him.

While it’s probably not the best idea to use deception in any of your business dealings, Gus and Saul understand the principle of putting your best foot forward. Business deals get done when you give a good impression. Suiting up and playing the part goes a long way.