Camp Kidprenuer wants to raise a generation of entrepreneurs 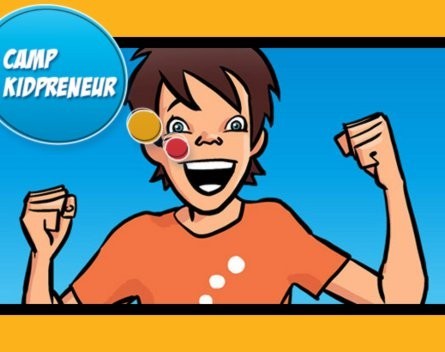 Alex Pirouz started his first business when he was 13.

His school held a competition where whoever raised the most money for charity got an Atari. Pirouz got five of his friends selling chocolate door-to-door. They raised a heap of money, and won the Atari.

At 22, Pirouz went back to it, starting no less than four businesses. All, sooner or later, failed, so he got a mentor and some solid advice before starting his fifth. That one was a roaring success – with just $1000 in start-up capital it was employing 45 people within nine months.

When kids think of their career choice, most nominate a profession. Pirouz’s early success got him thinking of business as an option. He wishes more kids did that.

That’s where Camp Kidpreneur comes in. It’s a week-long camp for children eight to 12 that teaches them the skills to be an entrepreneur. Pirouz is one of the Camp’s lead mentors.

Generally, parents pay the costs of their children attending. But Camp Kidprenuer is running a crowdfunding campaign to offer 100 scholarships to disadvantaged kids to attend the camps.

In a bid to raise money, Pirouz is walking one kilometre for every $10 raised, up to a limit of 100 kilometres. He tells SmartCompany he’s walked 86 kilometres in a day before, and so expects to survive the journey.

The camp’s founder is also getting in on the act. Creel Price, who founded the camp in 2011 after selling out of his business for $109 million, is sleeping in a tent until the money is raised.

The campaign is more than halfway through and has only raised a third of its $37,500 target. Pirouz is resigned to not meeting the goal. But he says because of donations received so far, 30 kids can now attend the camp on scholarships.

“These are the kids that most benefit from something like Camp Kidprenuer,” Pirouz says. “I had so many friends growing up that didn’t fit into the system. They rarely saw business as a career option. They should.”

“Most kids think business is about making money,” he adds. “We teach them it’s not just about that – it’s about coming up with a product that people want.”

“We add a real people-dimension to it, and I think that’s what kids get excited about. They come in with very little understanding of what business actually is and leave with a pretty good base-level understanding of how to run a micro-enterprise.”

More than a 1000 kids have gone through the camps so far. Over four days, camp leaders teach what they call the ‘Ready, Set, Go’ curriculum.

The first step is picking what type of business they want to go into, making a logo, and learning about business concepts like sales, customer research and marketing.

The second step – Set – sees the campers build and develop the product they’ll sell. And on ‘Go’, the go to the local market on a Saturday or Sunday and sell their products direct to the public.

“We used to have people with food stands. One kid had a highly successful hot-dog business. We’ve had jewellery, key rings, cards.

“We started off with a pantry where kids could decide what to make. But now, while we don’t want to limit kids, we think it’s more scalable to limit it to a few different products.

Now, children pick a backpack with all they need to make particular products. Some of the backpacks include supplies to make jewellery, cards, key rings and candles.