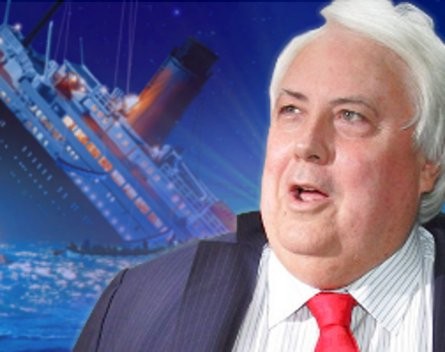 Clive Palmer is at it again.

A year after the mining billionaire said he would leave the Liberal-National Party after an unsuccessful attempt to run in Wayne Swan’s seat, Palmer is heading back into politics – this time with his own party.

Palmer told ABC’s Lateline yesterday he will revive the United Australia Party and place candidates in 127 seats across the country, including himself.

“I’m running to be the prime minister of Australia,” he said yesterday. “I am standing because I think I can offer better service to the community than anyone else.”

Palmer also pointed out there is little difference between the Liberal and Labor parties, saying he was “fed up” with watching both Tony Abbott and Julia Gillard.

The original United Australia Party was dissolved in 1945.

So far, political leaders have responded by saying while Palmer is free to enter the political debate, he has no firm policies and suggest this could be another one of the billionaire’s stunts.

Julia Gillard told ABC Radio the matter was “all a question for Mr Palmer and the appropriate party registration process”.

It’s difficult not to see Palmer’s move as anything more than a stunt, following his last prod at politics which fizzled out of the public eye. So far, Palmer and his new party are yet to reveal any policies.

Certainly Palmer’s other experiments – building a replica of the Titanic and a park for animatronic models of dinosaurs – are similarly strange, and don’t help counter his reputation as an eccentric, out of touch mogul.

But Palmer certainly seems more serious this time. Saying you’ll run is one thing, but claiming to have more candidates in play across the country is something else.

And it’s not as if Palmer doesn’t have a history of following through. Here are a few of Palmer’s projects which he has actually completed, or shown a higher level of dedication to.

Palmer has been a big force in tourism over the past couple of years.

Last year, he picked up a resort in Tahiti for a cool $10 million. And that wasn’t his only purchase. He attempted to buy the Club Med on the Great Barrier Reef, although was outbid for that particular deal.

He did, however, pick up the Robina Woods and Colonial golf courses at Robina for $7 million, and subsequently bought the Hyatt Regency Coolum Golf Resort and Spa.

He’s also spent quite a bit of his money on residential properties.

These purchases came at a time when some of Australia’s richer entrepreneurs dipped their hands into the property market. At the time, the tourism industry welcomed his investments. And with domestic tourism starting to pick up, Palmer may have a few steady investments on his hands.

Back in 2008, Clive Palmer bought the Gold Coast United football club and spent a lot of time and effort on the deal.

And while Palmer’s licence was ultimately revoked last year, you can’t blame Palmer for slacking off – estimates indicate he had poured $18 million into the team.

Palmer picked up Waratah Coal back in 2008, and then bought Queensland Nickel the next year. The companies had such a good year he ended up giving 750 long-term workers a luxury holiday, plus a new Mercedes Benz for 50 top employees.

The bonuses were estimated to cost about $10 million. He told The Australian at the time he had “enough money…so I thought I’d give some away”.

While Palmer may have a reputation for leaping from project to project, this is clear evidence he’s able to get a good return from his investments.