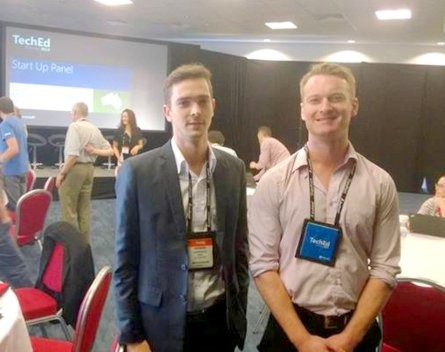 Co-opRating, a web app platform to connect people with skills to companies and organisations, was launched at Microsoft’s TechEd conference on the Gold Coast yesterday.

Lawrence Fox told StartupSmart he and co-founder Martin Smee had decided to launch a platform that combined beneficial social outcomes supported by a solid business model when they were working together in sales while at university.

“We were talking about what would be a better job to do. And we thought any business we could come up with that genuinely helped people would be better. So we started going for coffees and exploring viable businesses that would boost the community sector,” Fox says.

After settling on the skills shortage faced by many small businesses and community groups, Fox and Smee began developing the platform and business model.

“We noticed what was missing was any way for young people to show off what they’ve done in a way to help them do more. What we came up with was a way to help people do that, with the hope of drawing up interest from those who need those skills,” Smee says.

“Australians love getting out and helping, but there was nothing online to help that, so in the Aussie spirit, it wasn’t there so we built it.”

Lawrence says they focused on the need first, and then developed a business model to fit that.

“The need came first. We started to think about offering our skills to anyone who wanted them, on any scale, and it grew from there. We realised there wasn’t a tool for that, and decided to forget about ourselves and small scale, and create a robust platform instead,” Fox says.

Now that the application is live, they will be launching a pilot project to connect students at the Queensland University of Technology with community organisations and not-for-profits.

After extensive market segmentation research where Smee and Fox listed every industry in Australia, they realised they could develop a project management tool addition to sell to corporate clients to fund the business.

“We listed every industry in Australia and found that this model would fit into every single one. Private enterprise, government, every day people needed a way to connect to people with skills,” Fox says. “We know there is demand for this because of the success of tools like BaseCamp and ManyMoon, but they can’t leverage that within the system with recruitment.”

Fox says their main asset will be a database of skilled, proactive and almost qualified young people that businesses can reach out to directly to meet skills shortages.

The model will allow them to empower university students and community groups to connect for free. Students will be able to choose whether or not they appear in the searches.

“We’re going to private enterprise and offering them the project management software and the access to the uni students’ portfolios, and that’ll be the hook to be able to sell the product to them,” Fox says.

Fox and Smee will be focused on building up the critical mass on both sides of the platform, and developing the mobile app in the coming months.