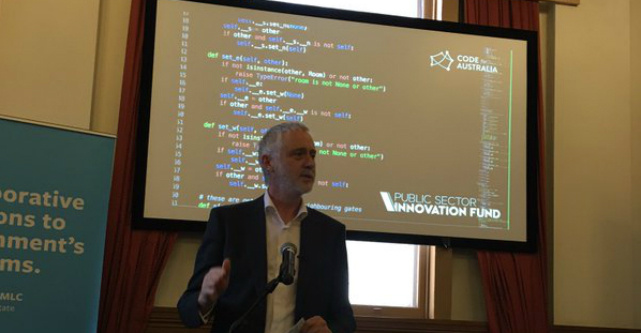 Three teams of Code for Australia innovation fellows will be placed in Victorian government departments to help solve policy problems, under a program launched on Friday.

The Andrews government will give $365,000 for the Code for Victoria Innovation Challenge, which calls on Victorian departments and agencies to nominate problems or processes that could benefit from more innovation and open collaboration with industry experts.

Three problems will be selected for Code for Australia teams, made up of designers, programmers and user-experience experts, to spend six months creating new tools or streamlining processes that will make government information more open and accessible online and improve the delivery of government services.

The initiative follows a pilot fellowship which saw the development of an online family violence intervention order process with the Neighbourhood Justice Centre.

One of the key benefits of having an in-house fellow was the ability to show stakeholders ideas for new digital systems, rather than trying to explain them in abstract terms, Neighbourhood Justice Centre strategy and innovation manager Louise Bassett told the audience at the launch event.

“It’s meant we could have lawyers, magistrate, court staff, community services workers and police all around the table working through the nuts and bolts of how it might work in reality,” Bassett said.

The Centre’s aims include increasing access to justice, preventing crime and being an innovation hub for the justice system. They’re currently working on a system that would allow people to plead for minor offences online, meaning they wouldn’t need to take time off work to attend court, for example.

Others often ask why having a Code for Australia fellow is preferable to using an external supplier, Bassett explained. Familiarity with the organisation was a big help — before fellows are “allowed to hit the keyboard” they spend time getting to know the work, structure and culture of the place.

“We found having someone as part of our problem-solving team that’s collaborating with us daily we could get a quicker response,” she said.

“If you have a good relationship with an external supplier it can work really well but I think in this messy early stage of innovation it’s often very hard to do the details and specifications you need to go to procurement. It just adds to the barriers of getting these iterations off the ground.”

And it can save on fees. “If there’s a lot of ambiguity in the tender documents suppliers can sometimes charge fees that reflect that, and I’ve found the appetite for innovation goes down as the consultants’ fees go up,” she noted.

Plus in places where many feel uncomfortable with technology, having someone there who knows what they’re talking about and can explain it in plain language plays a demystifying role.

Over the next six weeks the government and Code for Australia will be speaking to departments about what problems need addressing and inviting people to take part in the program, said Special Minister of State Gavin Jennings.

“This partnership will bring together the public service and tech industry experts to open up government information online and find new ways to improve government services,” the minister stated.

The Victorian government recently hosted its first budget hack, inviting coders to use technology to make the state budget more accessible and transparent to citizens.

The fellowship program is funded under the state government’s Public Sector Innovation Fund. Coders and government bodies can apply to take part in the innovation challenge on the website.

This article was first published on The Mandarin.