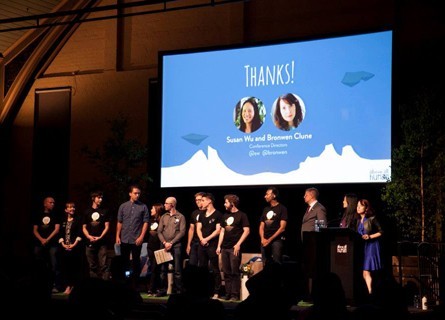 Organisers behind next year’s above all human conference hope bringing the event back to Melbourne will keep fuelling the city’s red-hot startup sector.

Conference co-founder Bronwen Clune describes Melbourne as the “epicentre” of Australia’s innovation scene, saying momentum has shifted away from Sydney in the last five or six years.

“Slack, Etsy, Eventbrite, Stripe are all coming to Australia and basing themselves in Melbourne,” Clune told StartupSmart.

“Furthermore, some of the most exciting emerging startups like CareMonkey and CultureAmp were founded in Melbourne.”

The conference will host an enviable program of local and international speakers including Xero co-founder Rod Drury and Slack’s director of customer experience Ali Rayl.

Clune says the startup community has always been well-connected online, but face-to-face networking opportunities like above all human could help Australia’s next big tech export “take off”.

“For a long time we’ve been talking about Australia’s next Atlassian and I think we’ve seen more than one well and truly on their way to making their mark,” she says.

The startup crowd is a diverse one, so Clune and co-founder Susan Wu make a concerted effort to have their list of speakers reflect that diversity.

Last year they achieved a 50-50 balance between the male and female speakers.

“Susan and I want to certainly drive the message home to all other tech conferences that are running in Australia that they have no excuse, that they have great responsibility,” she says.

The last above all human conference sold out and Clune expects the same will occur this time as the startup community continues to grow in number and influence.

“It’s a great time to be in tech anywhere in the world and there’s no reason why Australia can’t play more of a frontrunner role on a global scale,” she says.

“There’s so much happening, let’s set things on fire.”