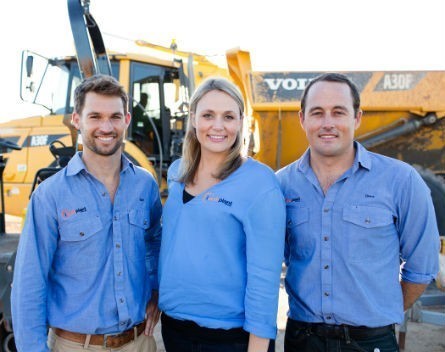 The online database connects large construction and mining companies with equipment hiring businesses, who then quote and bid for the jobs.

ISeekplant director Matt Peters says the cash injection will be used to expand the service across Australia, and develop a new bespoke option.

“We’ll use the money to build some scale and more aggressively infiltrate the market,” Peters says.

The startup now has 70,000 monthly users, up from 12,000 in February, making it the most used plant hire site in Australia. It boasts a database of more than 50,000 machines for hire and users make 6000 daily searches.

Peters says the growth has been very positive, especially in the last six months.

“There are only a certain number of people in plant procurement, so we’re really, really happy to have an audience of that magnitude,” he says.

“There’s been tremendous growth in traffic onto the site and in the number of new companies coming to us.”

“All the metrics are heading in the right direction. The contractors love it, and plant hire companies are coming to us in numbers.”

Peters says the service helps to improve transparency and efficiency in the construction equipment hire sector.

“If you’ve got a construction site going on, whether it’s a backyard pool or large mine, you’ll be able to find what you want on our site,” he says.

“It’s a huge market, and a good chunk of them don’t have a web presence. Collecting everyone and putting them in a central area where everyone else can find them is where the value is.”

The startup launched in 2012 and has been forced to do things a bit more traditionally due to the state of the industry.

“We’re building an online solution but doing it in an old-fashioned way,” Peters says.

“We’ve been driving around the country meeting people. The nature of our customers is that they’re not traditionally tech savvy for the most part, so we’ve had to walk a lot of people through the process.”

ISeekplant was backed by 3D-positioning and survey solutions giant Position Partners in January last year in exchange for an undisclosed equity stake.

While focus is on growing nationally in the short-term, Peters says he’s open to looking globally at some point.

“The opportunity is there for us, but at the moment the Australian market is definitely juicy enough,” he says.

“We’ve always got our eyes on the horizon.”