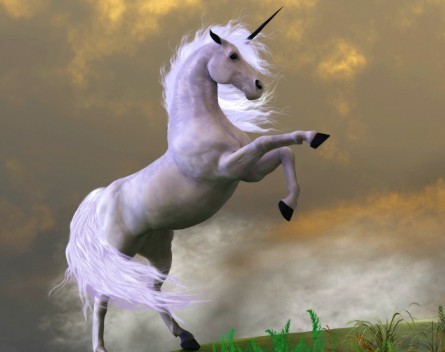 In Australia, startups only dream of unicorns, but that could change with Silicon Valley investor Bill Tai suggesting that Canva has the ability to be Australia’s first ‘unicorn’ company – that’s a company valued at $1 billion.

Whether those assertions are imaginary or not, things certainly look optimistic for the Sydney-based graphic design company co-founded by Cliff Obrecht, Melanie Perkins, and Cameron Adams. Just 13 months after launch they have 870,000 users who have created 6.2 million designs, with 1.27 million of those just in the last month.

The platform is free to use and charges a low ($1) fee for premium designs and images, with a 35% month-on-month growth in paying customers over the last six months, though most customers still use it for free.

Tai and Lars Rasmussen – whose mapping company Where 2 Technologies was acquired by Google to create Google Maps – are both investors in Canva, believing it’s the next most exciting startup in Australia at the moment.

There have been a number of factors that often work against Australian startups, which Canva has been able to mitigate – namely talent, isolation and access to funding. But its growth has been helped by two other crucial factors every startup hopes for: grassroots marketing by community evangelists and what Tai calls “good market timing”.

Access to talent is often cited as a reason why companies flock to Silicon Valley, but Perkins says that she had the opposite experience and found it hard to recruit engineers in the US.

Rasmussen, who is now based in London working with Facebook, says the success of the company to date has been its ability to assemble a world-class engineering team locally after Google dissolved some of its operations here.

“It’s important to have a vision, but you need a team to make that happen, I can’t emphasise how important that is,” Rasmussen says. “The team at Canva is, so far as engineering teams goes, world class.”

Adams, who looks after product, was a lead designer on Google Wave for four years and has managed to bring some of the engineering talent with him across to Canva.

As an aside, Tai and Rasmussen say that it’s becoming harder for engineers to get visas in the US, which is creating problems for companies recruiting there, but Rasmussen notes is “doing great things for the global startup ecosystem”.

To date, Canva has raised a total of $6.6 million with plans to do another round some time in the future.

Their initial raise saw Canva bag $3 million in seed money in a round that included Tai, Rasmussen and Yahoo chief financial officer Ken Goldman. Later they joined a host of others, including Paul Bassat’s Square Peg Capital, to invest $US3.6 million ($A4.12m).

Tai says given the number of opportunities for investors in the Valley, it was rare that they looked elsewhere, but that Canva was a “special app” with global potential in that it solved a world-wide problem by creating “low friction, high impact” communication (high quality graphics) through its easy to use interface.

Tai says that while most startups needed to be in the Valley, Canva was an exception in that it was creating a global company that did not necessarily require it to be in the US.

He noted that other Australian companies like Freelancer and 99designs were leaders in similar fields creating a marketplace for low-cost digital labour, something he attributes to our proximity to Asia.

To date, Canva is used in over 200 countries, while the US is the biggest market followed by Australia, it also has a big user base across Asia and as far as Brazil.

The biggest growth factor for Canva has been word-of-mouth through self-organised community evangelists.

“Every day I open Twitter and I’m blown away by the love people have for Canva,” Perkins says.

A number of Facebook groups dedicated to Canva have sprung up organically, as well as a number of users offering courses in how to use the platform. It also helps that Guy Kawasaki, one of Apple’s original evangelists, has signed on to be Canva’s “chief evangelist”.

Tai notes that timing is an important ingredient to success and not something you can plan for, though he says Perkins’ ability to predict where the market was going in terms of graphic design has been a huge factor in Canva’s success.

“You can’t make timing happen, but timing for the wave feels just right for Canva right now, and that’s what the growth figures confirm for us,” Tai says.