Cryptocurrency startup learns a lesson or two about protecting its interests 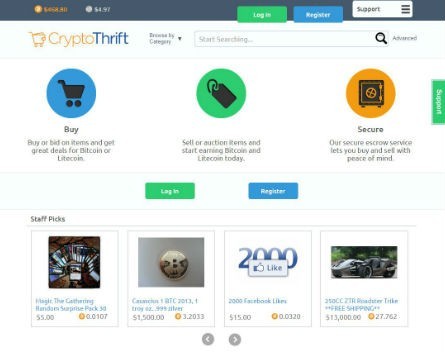 Online cryptocurrency marketplace CryptoThrift is learning the perils of operating an online marketplace in its infancy.

Last week the startup sent an email out to all its users after noticing a sharp increase in the number of sales outside the platform, which its founders assumed was happening so sellers could avoid fees.

Co-founder Paul Screen says sales on the platform, which offers an eBay-style service for bitcoin and litecoin, had been steadily increasing before a steep drop prompted the team to investigate what might have occurred.

“There were various culprits, the volume they were taking out of our daily sales were significant enough for us to notice,” he says.

Some sellers were using CryptoThrift as a way to find customers, before doing the transaction outside the platform. Sellers pay a flat 2.5% flat rate or a transaction fee, whichever is higher. Buying items is free, but the company charges a 1% fee if escrow is selected at checkout.

In the letter to customers, CryptoThrift says it had compiled a list of users that it suspects made sales via Skype or the platform’s personal message system.

Dealing with scammers and the anonymity of bitcoin is why CryptoThrift chose to offer escrow, but Screen says they didn’t want to make it compulsory because it would force higher prices on buyers purchasing from sellers they trusted.

“There really isn’t anything we can do, other than warn our users, and appeal to them at the same time,” he says.

“It struck a chord with me and perhaps it should have done. But I felt the cryptocurrency community is meant to be supportive of each other, and it was a slap in the face,” he says.

“We’ve put so much of our revenue back into marketing to try and grow the community.”

CryptoThrift will continue to monitor the situation and may be forced to ban users if there’s evidence they continue to go outside the platform.

A large competitor is looming on the horizon for CryptoThrift, with rumours circulating that eBay-owned Braintree could be about to accept bitcoin. Sources told Re/code that Braintree has plans to announce such a move in the near future. It follows a similar Wall Street Journal report in August.

Screen says when it does happen it will be an important milestone for bitcoin.

“If eBay takes the plunge too, then overnight they become a direct goliath competitor to CryptoThrift,” he says.

“This doesn’t concern me too much though as I believe it will be a long time yet before eBay does start accepting Bitcoin. They rely too much on ‘after-the-fact’ processing of complaints and refund requests, using their ability to debit PayPal accounts (and linked bank accounts/cards) to ensure that they can refund buyers a long time after the seller received their money.

“This just doesn’t work with bitcoin, which is why CryptoThrift holds funds in escrow until the buyer is happy to release them.”