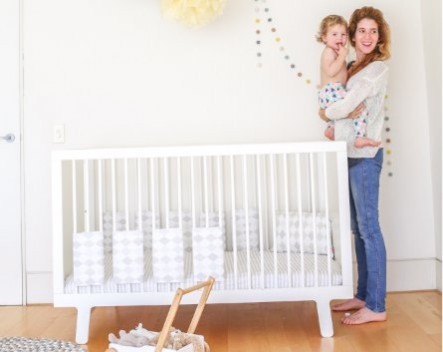 Entering a crowded market isn’t always a bad idea if you’re willing to carve out your own niche by developing a strong brand, says Chloe Brookman, whose three-year old nursery furniture start-up is now growing 50% year-on-year.

Brookman and her sister Olivia launched Olli Ella as a side business in 2010, when Chloe struggled to find products she liked during her first pregnancy.

“One of the riskiest things we did that paid off is we ignored the market and didn’t try to compete. We wanted to carve a new niche for mums who didn’t want their nursery to look like a doily,” Brookman says.

“The biggest challenge has been entering a very competitive market completely blindly, but that’s also been the best bit of the business too. Being rookies means we’ve made mistakes and tried things we probably shouldn’t have.

The Brookman sisters chose to grow their business slowly. After creating an ergonomic nursing chair and selling it to a few friends, they launched the company in July 2010, and extended the range to include three different kinds of chairs in January 2011.

The company expanded into bedding and home décor in September 2011. They’re now selling online and via retail partners in Australia, New Zealand, England, Germany, the United States and have just began selling in Hong Kong.

The Olli Ella team of six are focusing on developing their offering in Hong Kong and greater China in the coming year. All the products are manufactured in the countries they’re sold in.

Brookman says choosing to manufacture locally was a difficult financial decision, but was non-negotiable as quality is the most important factor in a brand for children and babies.

“We wanted to be completely confident about quality, as these products are for mums with new babies. It also meant avoid investing in a huge amount of stock and the cost of warehousing as we could do smaller runs,” Brookman says.

Despite the growing consumer demand and international expansion, Brookman says running a manufacturing and retail business has been a steep learning curve.

“We didn’t know how to work out margins or anything about wholesale. But the saving graces was we weren’t dreaming about being a big company, we just wanted to be a good brand,” Brookman says.

Three years in, Brookman says they’re seeing a sudden surge in online orders probably due to increasing word of mouth recommending. She estimates 65% of their current sales from retail partners, but expects that’ll shift slightly in the coming years.