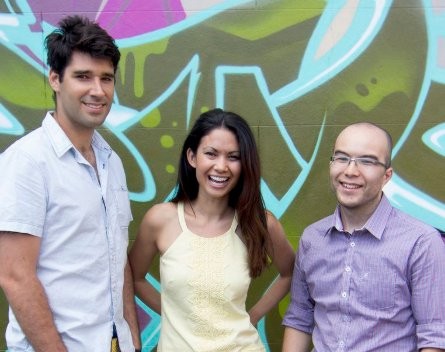 Sydney-based start-up Canva has raised $3 million from a host of high-profile investors, including Bill Tai and Lars Rasmussen, after attending Tai’s kitesurfing camp in Hawaii.

Canva, founded in August last year by Melanie Perkins and Cliff Obrecht, is an online collaborative design platform, allowing users to create professional quality designs regardless of their skill set.

It’s the second start-up for Perkins and Obrecht, who previously launched Fusion Books in 2007 while studying at university.

Fusion Books is an online design system for the school yearbook market, and is currently used by more than 10% of Australian high schools. It has also launched in France and New Zealand.

Perkins and Obrecht co-founded Canva with Cameron Adams, who is Canva’s head of product.

Cameron was the lead designer at Google Wave and previously founded email management tool Fluent, which he started with two other former Google executives.

Canva announced this morning it has raised a $3 million seed round from major Australian and US investors including Matrix Partners, InterWest Partners and Dave McClure’s 500 Startups.

Canva is one of the first investments of newly launched venture capital fund Blackbird Ventures, which counts Tai and McClure on its list of investors.

“We’ve supported Canva because it’s a strong team with a truly innovative product and we think it has the potential to be a global success,” Commercialisation Australia chief executive Doron Ben-Meir said in a statement.

Canva isn’t entering the market until May, when it will launch in America and Australia simultaneously. According to Perkins, the seed round demonstrates confidence in Canva’s team, product and vision.

Perkins says the funding came about after she and Obrecht attended the MaiTai Global kite camp for entrepreneurs in Hawaii. The camp was started by Tai and kitesurfing enthusiast Susi Mai.

While there, Perkins and Obrecht were introduced to a number of Australian and US investors.

“I met Bill Tai at a conference in Perth a few years back. We kept in contact and kept him informed about what we were doing,” Perkins told StartupSmart.

“[MaiTai Global] was an amazing experience… The key ingredient is they bring together influential investors, journalists, successful entrepreneurs and start-up entrepreneurs.

“Everyone is learning to kitesurf, so it’s about getting people out of their comfort zone. It helps people to bond in a way you can’t do in a boardroom.”

Perkins says the funds will be used primarily for the Canva team, which currently consists of nine people. Fundraising took almost a year, but Perkins is very happy with the investor line-up.

“We were trending on AngelList, which helped us close the round. Investors knew about us before we talked in the room – it gave us an added layer of credibility,” she says.

“Our investors bring significant experience and expertise to the table, and are accomplished entrepreneurs in their own right.

“These are people who’ve sat behind the wheel at some of Silicon Valley’s most successful tech companies.”

Google Maps founder Rasmussen, who is now director of engineering at Facebook, said he was impressed by the Canva founders, describing their story as “highly compelling”.

“This is a strong team with a big vision, and I’m thoroughly enjoying working with them,” Rasmussen said in a statement.

“Design is moving into a more collaborative and social world, and I predict Canva will be leading the way.”

According to Rick Baker, a partner at Blackbird Ventures, Canva’s team is a sign of growing maturity in the Australian start-up scene.

“The desktop design industry is ripe for disruption and the Canva team are the best people for the job,” he said in a statement.

“The founders have attracted a stellar cast of international investors, and are proving you can launch a truly global company from Australia.”