Diary of an entrepreneur: How Sam Chandler founded Nitro, a $30 million tech sensation 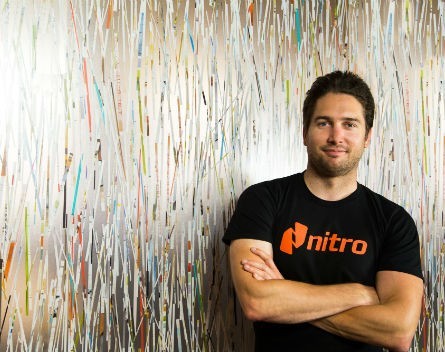 Sam Chandler has just flown in from San Francisco for the EY Entrepreneur Of The Year Southern Region awards ceremony in Melbourne.

It’s a standard commute for the 33-year-old entrepreneur after he moved Nitro’s headquarters to San Francisco in order to access a bigger market for capital and talent.

“For a lot of the roles we were looking for in Melbourne we couldn’t find appropriately qualified candidates,” Chandler says.

In contrast, he says San Francisco has “a rich pool of talent for those roles”.

“The Bay Area ecosystem is remarkably open, people are very willing to help each other,” he says.

“As a young founder and owner it was a good place for me to absorb a ton and learn a lot from the ecosystem.”

That learning has paid off with Chandler taking out the emerging entrepreneur award at the ceremony.

It’s not the first award Chandler has received and won’t be the last after he spotted an opportunity to enable businesses to create, share, collaborate and sign documents both inside and outside the organisations.

“I saw that businesses worked terribly inefficiently when it came to collaboration and a lot of actions that could be happening in a digital world were happening offline in a paper world,” Chandler says.

Nitro launched in 2005 as the leading alternative to Adobe Acrobat and now the business is on track to turn over $30 million this financial year.    Chandler tellsSmartCompany how he showed an entrepreneurial bent from a young age and outlines the opportunity available to Australia to be one of the world’s startup capitals.

When he’s not flying halfway across the world Chandler usually gets up and goes to the gym or for a run.

“I’m up and going at 6am and I’m home by 7 and then I crank through email ahead of getting through to the office as my days are a complete nightmare with lots and lots of meetings,” Chandler says.

It’s a work ethic Chandler picked up from his parents who are both small business owners.

Chandler says he was a “rebellious anti-authoritarian guy” at school, so the idea of not having a boss and being able to do what you wanted when you wanted was attractive to him.

“I quit university with only two subjects left to complete my degree and moved to San Francisco to keep building Nitro, and most parents in that situation lose it, but they were entirely supportive,” Chandler says.

“Around my generation of entrepreneurs there is a bit of a joke amongst a few of us that all of us started out with email marketing and web design companies and I think that was just the thing to do in the mid to late 90s,” Chandler says.

“It was something I figured I could charge money for at a time when the younger generation knew more than the older generation.”

Chandler admits weekdays are “pretty boring” as he’s in the office between 8am and 9am and there for another 12 hours most days.

Lunch is eaten at his desk or “professional socialising” with lunch work commitments.

He says it’s a shame he had to move Nitro from Melbourne to San Francisco and more needs to be done to keep tech companies in Australia.

“The Aussie venture capital industry has always been small and it is smaller right now than it has ever been, which is shocking,” Chandler says.

He says there is an opportunity for Australia to be a “big leader” over the next decade on the global technology stage.

“As the world becomes more of a technology-driven economy, we can either rise to the front or fall behind,” he says.

With the mining boom coming to an end, Chandler says Australia should be gearing up for a knowledge economy future.

“If the government doesn’t do something to promote the creation of or the expansion of the private equity venture capital ecosystem in this country we are literally going to squander a once in a century opportunity,” he says.

“If you look at the great startup capitals of the world there is only three or four and the fifth spot is going wanting.”

Chandler names the Bay Area in the United States as number one, Israel as number two, Dublin as number three and London as number four.

“Australia could learn a lot by looking at Israel and Ireland’s playbooks and take a bit from each and apply it here,” he says.

“We should be a place where entrepreneurs start companies and grow them and keep the capital base here. We should also be a place that foreign companies want to invest and grow and scale high growth and high potential businesses.”

Chandler says Israel has done “a number of things” Australia could look to from guaranteeing certain types of investments at a commercial rate of return or proposals to doing things like providing on call liquidity.

“At the end of they day it is common sense,” Chandler says.

On weekdays Chandler doesn’t have much time for leisure by the time he leaves work.

“I like to be in bed early,” Chandler explains.

“And I have a routine that I read for an hour before I go to sleep.

But it’s on the weekends that Chandler has time for himself.

“I’m a big skier and a big motorcyclist,” he says.

“I collect vintage bikes and I also cycle. I used to do a lot of cycling during the week but now I run instead.”

At the moment, scale is key for Nitro, rather than profitability.

Chandler says Ireland is a great location for Nitro but not because of the tax benefits it offers.

“Most companies like ours don’t run any profitability until they are $50 or $100 million in revenue,” he says.

“They are scale companies and you would be laughed at if you try to achieve profitability before scale in the Bay Area. “

Chandler says the Irish government has been “super clever” by making Ireland the best place in Europe for technology companies to invest in.

“This means all the mid stage startups like Nitro and Dropbox are all opening in Dublin because it is the best talent pool,” he says.

Hiring in Ireland means Chandler is able get candidates straight out of Salesforce, Google and Facebook: “All the bigger guys who have been established there for a number of years.”

“In Dublin we find people who are used to working for West Coast software companies; they have the right attitude and the right skill set and Dublin has an advantage which Australia doesn’t have as it is more cost-effective.”

“We are also contemplating doing a large capital raising in the new future.”