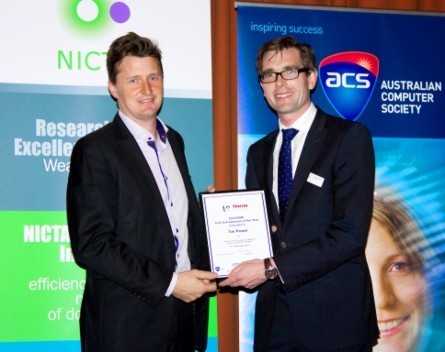 The managing director of 3P Learning, Tim Power, along with Ben Richardson and Dave Greiner from Campaign Monitor, have taken out the top prizes in the 2014 NSW Tech Entrepreneur of the Year Awards.

The awards, organised by the Pearcey Foundation, were presented in a ceremony at NSW Parliament House by NSW Finance Minister Dominic Perrottet. Past winners have included Naomi Simson from Red Balloon, Freelancer’s Matt Barrie and Jo Burston from Job Capital.

Richardson and Greiner made headlines earlier this year when they secured a $US250 million ($A266 million) investment by venture capital firm Insight Venture Partners.

Meanwhile, Power told StartupSmart he feels a little unworthy, given his business was built by a team rather than an individual. His company, which launched in 2005 with interactive educational CD-ROMs, produces interactive learning resources for five-to-18-year-olds in maths, literacy and science.

“It’s a company built with very little capital on blood sweat and tears, along with a team that’s not afraid to make mistakes, iterate, experiment and learn,” Power says.

“For the first few years we went hard to the wind – what we made we invested back. In our office, in a cabinet, there’s the server that our whole site ran off until two or three years ago when we moved to the cloud.

“We tried to push globally as fast as we could – we’ve now got teams in 12 countries – and we went to New Zealand and the UK early just to build scale and to get our products into some of the leading schools.”

In August, 3P Learning listed on the ASX, and now has a market capitalisation of over $300 million, with Power saying the company still puts the love of learning above all else.

“The company has around 250 people in the team, with R&D and headquarters in Sydney. It’s used by 17,000 schools and 4.7 million students. We also do the World Education Games covering world maths, world science and world literacy, with 5.1 million students participating.

“The IPO was a good process that involved the whole team, and they enjoyed it a lot. Much to our surprise, we ended being the second-largest technology company to list on the ASX in its history.”

“My advice to other entrepreneurs is don’t fear making mistakes, iterating and experimenting. Don’t fear innovation.”

Also among the winners is design crowdsourcing website Designcrowd’s founder and chief executive, Alec Lynch. His company has so far raised $7 million in venture capital and launched offices in the UK, Canada, Singapore, India and the Philippines.

Lynch told Private Media his award reflects on his company’s success and its opportunities for growth into the future, as it aims for $100 million a year in gross revenues.

“In the past 12 months, we’ve opened two new offices – in the Philippines and in San Francisco in the US. Approximately one-third of our team and 75% our revenue now comes from overseas, he says.

“We’ve had good success growing but there’s only so much you can do remotely without feet on the ground. It’s not just setting up offices, but it also takes time to build your brand in a new marketplace where it is less known than in Australia.”

The other award winners were as follows:

Genevieve George, OneShift: George is a young entrepreneur and founder of online jobs network OneShift. The company already won the 2013 Australian Business Awards for Enterprise, Innovation and e-Business, as well as the 2013 Silver Stevie Award in three categories.

Jeremy Levitt, Service Seeking: Jeremy Levitt is co-founder and joint chief executive at ServiceSeeking. His company connects customers who are looking for a particular service with local companies providing those services over the internet.

Mike Ford, SiteMinder: Ford is the managing director and founder at SiteMinder, which received US$30 million in series B financing from Technology Crossover Ventures earlier this year.