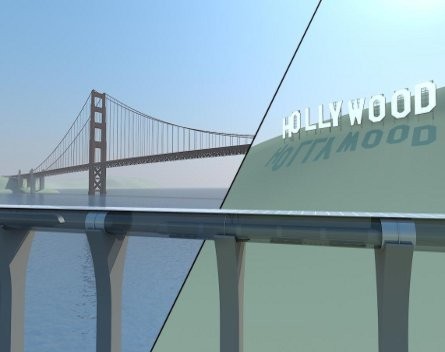 Remember how, in the 1970s, state governments and planners promised us that freeways were the solution to traffic jams?

Fast forward to 2013. It’s bumper-to-bumper traffic every morning. Honk, honk, break. The trains are late – when they aren’t cancelled or ridiculously overcrowded. Suburbs sprawl ever further west of Sydney and southeast of Melbourne, while roads and rails come decades later.

The situation is similar in cities the world over.

Enter South African-born entrepreneur Elon Musk. Musk is best known as a founder or co-founder of a number of companies, including PayPal, SolarCity, Tesla Motors and SpaceX.

Over recent weeks, Musk has stepped into the raging debate about California’s terrible traffic with a plan to link LA and San Francisco with a new mode of transport called a “Hyperloop”.

What in blue blazes is a Hyperloop, you ask? The short version is that it’s a giant pneumatic vacuum tube that would transport people in pods between the two cities at slightly less than the speed of sound. The steel tube, the top of which is covered with photovoltaic panels, would be suspended off poles around six metres off the ground along existing freeway median lanes.

Among many other claims, Musk says his Hyperloop system can be built for $US6 billion, with earthquake-proof pillars, and get a commuter from Los Angeles to San Francisco in just 30 minutes. You can even build the deluxe version – with capsules large enough to fit a car – for the bargain-basement price of $US7.5 billion.

With Los Angeles now listed as a synonym for “catastrophe” in most urban planning guidebooks, the plan has gained the attention of the Wall Street Journal, Forbes, Washington Post, The Guardian, the BBC and countless other respected publications.

Needless to say, there are more than a few people who are downright sceptical about Musk’s claims. For what it’s worth, Old Taskmaster is too – especially when it comes to the construction cost.

For some odd reason, reading through some of the figures, your humble correspondent had a flashback to the monorail episode of The Simpsons. Any chance the track could bend? Not on your life, my Hindu friend! I swear it’s Springfield’s LA’s only choice! Throw up your hands and raise your voice!

As for it being built in the short term, the fact that there isn’t even a prototype yet probably doesn’t help Musk’s cause. I hear Brockway, Ogdenville or North Haverbrooke could use one.

Nonetheless, even if you’re a cynic, you have to hand it to him.

Even if this tube idea turns out to be full of hot air, it’s certainly earned a lot of free publicity for Musk’s other ventures.

Likewise, it’s better to have a big picture vision, even if it’s a little on the hyper-loopy, than a narrow tunnel-vision that only looks at the next quarter’s bottom line.

And to be fair, a few years ago people said the same things about the idea of a mass-produced electric car or a privately owned space station. If anyone’s going to fund a way to suck the traffic out of LA, it’ll be someone like Musk.

The moral of the story is simple. Don’t be afraid to have a long-term big picture vision. Pipe dreams are better than tunnel vision.